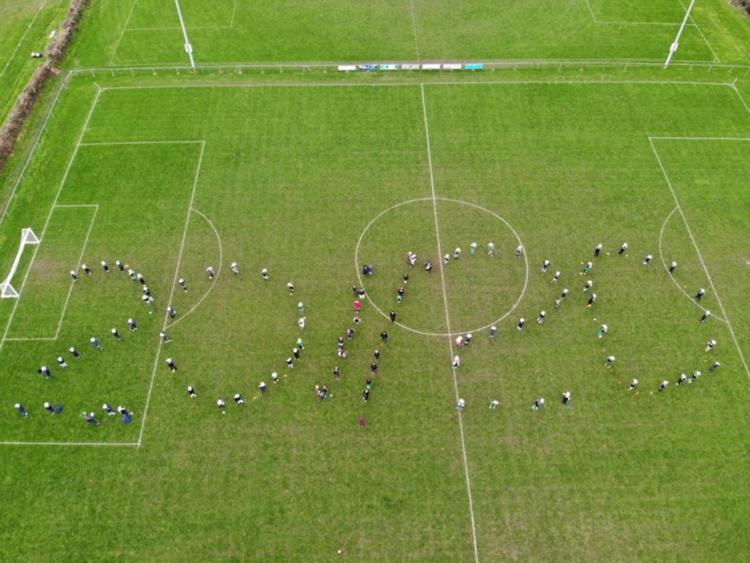 Participants make the 20/20 logo at Rossleighan Park at the weekend.

On a bitterly cold, Sunday 27th January and in between some heavy showers, the girls and women of Portlaoise AFC had a great afternoon of football and fun.

This was Portlaoise AFC’s first event to support the 20x20 campaign which aims to increase media coverage, participation and attendance at women’s and girl’s sporting events by 20% by 2020.

The Wexford players brought along their exceptional treble trophy haul from last season, which wowed the players and parents alike and were the subject of many photos throughout the afternoon. WNL League, WNL Shield and the FAI Women’s Cup were the three impressive looking trophies on show.

The day kicked off with a pre-season friendly match between Portlaoise AFC and Limerick FC women. The Women’s National League team came out on top in that one but there was some great football on show at times, despite the cold conditions.

It was great to see the Portlaoise AFC women competing at this level in Rossleighan.

Following this game, the players went in for lunch and had to brave the cold again half an hour later as all players, parents, coaches and friends jumped in for a quick aerial photo of everyone standing in the shape of the 20x20 logo!

Dave McCall quickly organised all the players from senior to youngest (U-6 academy player Alice Delaney) into 12 teams ready for a mini women’s world cup!

Everyone played a few games of footie together and then it was inside for the last leg, where a few of our exceptional parents had hot chocolate ready for all the players while they had a very informative and interesting Q&A with our Women’s National League guests.

The motto for the 20x20 campaign is 'If she can’t see it, she can’t be it.' This was a first step for our players to 'see it'. Our message is, please come out and support the women and girls in your sporting community.