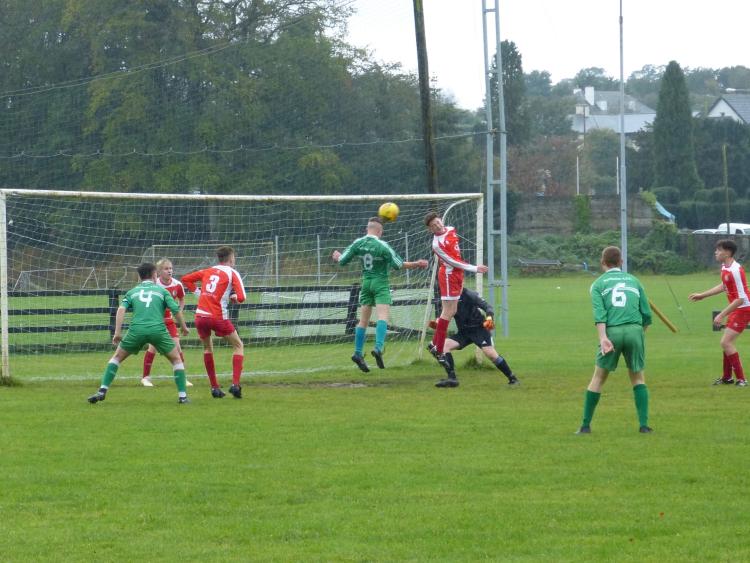 A rare Sunday morning kick off for this league brought Portlaoise AFC to Emo Celtic’s pitch that was firm enough despite the deluge of rain that fell in the previous 24-hours.

AFC were a bit too keen at the start with a few sloppy offsides and a booking for a jersey pull back inside the opening two minutes.

Four minutes in and great battling by Robbie Farrell in the middle and his run up the left wing to cross it in, but there was nobody in the right place in the box to tuck it away.

Moments later and it was 1-0 to the visitors. A super cross from wide-right near the half way line by Kieran O’Donnell was met by the leaping Robbie Farrell to head home from the penalty spot area.

AFC were a little sloppy at times but good play at the back by Ben McDonald and in the middle by Ben Doyle and Kieron Whelan working well with Robbie Farrell. Kieron Whelan would go on to play one of his best games in the green jersey for quite some time.

22 minutes gone and a half-chance for Emo’s number 13 as he took a half-volley while being challenged on the edge of the box but the shot just popped over the crossbar.

Seven minutes later saw a quick ball from Cathal Lee to send Jamie Toman racing through the middle and he slipped the ball into the bottom left corner giving the keeper no chance. 2-0 to the visitors.

With six minutes left in the first half, Jamie Toman and Cathal Lee linked up really well again as Jamie caused panic at the edge of the box leaving the keeper stranded on the deck and Cathal Lee fired home between the scrambling defenders. 3-0 and light between the sides.

Ben Doyle was unlucky not to add a fourth just shortly after as his own great ball play in the build up and Jamie Toman’s ball in to him was just at the wrong height to stick a foot or head to it at the near post.

Jamie Toman was then set free to run in on goal on the stroke of half time but he just pulled the ball wide left. Half time and the score was 3-0 to AFC.

An opening shot each on 41 minutes saw Cian Moore have a go for AFC and a free kick went wide from Emo. Another free-in from Emo saw Cian Rafter cover the goal line and help out keeper Hughie Siler to clear the ball away.

An important interception was made by Ben Doyle inside the box on 46 minutes as the advancing Emo attacker was about to pull the trigger.

Daniel Gorman scored after putting pressure on the keeper after Kieran O’Donnell passed to Ben Doyle and Ben dinked a lovely ball in from the right end-line onto Daniels’s head.

Emo kept trying to break through and AFC needed a strong one handed save by Hughie in the goals after a bad defensive header at the back allowed the attacker in on goal for the shot.

AFC were having their chances going forward too with Robbie Farrell smashing the post and Ben Doyle’s left-footed rebound effort blocked down in the box.

Penalty to AFC on 54 minutes. Ben Doyle was taken out on the edge of the box with raised studs catching him on the toe as he was about to take a shot. Doyle had to be substituted but in the meantime, Kieran O’Donnell put away the perfect penalty to make it 5-0.

Cathal Lee had a go from inside his own half when the Emo keeper was still outside his box after taking a free but the shot was wide.

Defender TJ Delaney then made a better clearance than a shot from six yards out after a nice cross in from Kanye Tshula. Cian Moore had a fine strike saved from outside the box too just afterwards.

Cian Rafter won a free at the right corner flag on 67 minutes and TJ Delaney crossed the ball in to Dan Gorman who was unlucky to see his reaction toe poke go inches wide of the left post.

Lee Smyth made a superb sliding tackle to trap the ball and get it away to safety as the lively Emo number 13 was about to slide the ball across into the goal area on 70 minutes.

Emo got a goal back in the 77th minute. The referee played advantage for a foul by the AFC defender and Emo players were 2-on-1 with the keeper who saw the ball hop in over him.

Two late goals in less than the last two minutes. Lee Smyth fired a ball the full length of the right wing and Jamie Toman picked it up near the right corner flag and ghosted past four players to get in close on goal and beat the keeper at his near post. 6-1.

Jamie Toman then added another with the last kick of the game as TJ Delaney crossed in from the right and Daniel Gorman’s header was saved but Jamie was there to slot it home.