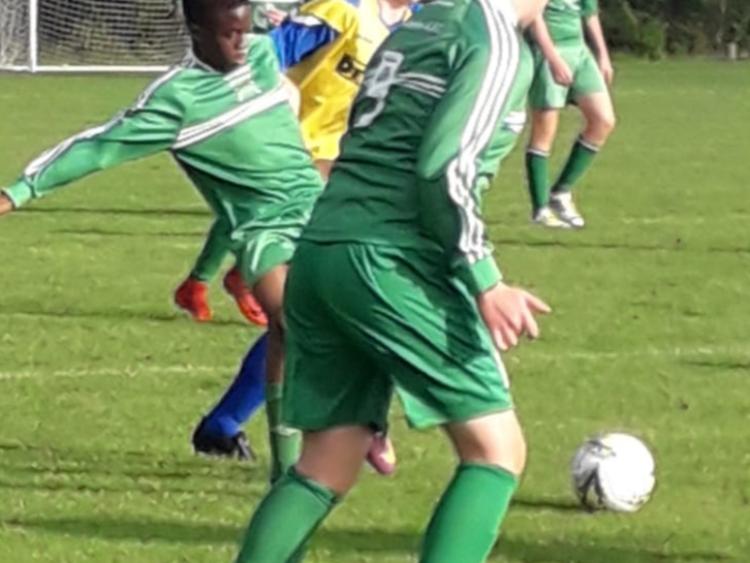 Portlaoise Utd hosted their neighbours Mountmellick in Rossleighan Park on Saturday morning last, and despite recent heavy rain the pitch was in excellent condition.

Benedict Fordjour was in good form early on for Portlaoise, while Mateusz Kocon also made some fine runs from midfield.
However, the first shot in anger came ten minutes in from Mountmellick's Darren Coss, Aidan Keane pulling off the first of many fine saves to deny him the opening goal.

Portlaoise took the lead shortly afterwards, Andrew Goggin breaking up an attack, feeding Fionn Devoy whose effort ended up in the top corner - a fine way to celebrate his birthday the previous day.

Mountmellick came storming back after this, Sean O’Sullivan and Tadhg Duffin putting their bodies on the line to deny them with Matthew Walsh heading a dangerous cross out for a corner.

Portlaoise had their moments on the break, Benedict firstly liking up with Callum Leonard to create an opening and then likewise with Thomas Swords. Portlaoise were trying to hang on to their lead until the break with David Burke making good interceptions on the left flank and Tadhg producing some excellent tackles.

Aidan Keane pulled off two more good saves, but eventually Jack Gorman equalised with a rocket of a shot from the edge of the box to leave it 1-1 at the break.

Portlaoise started the second period on the attack, Callum Leonard and Matteusz forcing a corner while Matthew Walsh had a fine run and shot.

Five minutes in and Mountmellick took the lead after a scramble in the Portlaoise box. On the restart, Luke Makem and Benedict created a half chance but within minutes Mountmellick had doubled their lead after a series of defensive errors by the home side.

Portlaoise refused to throw in the towel with Thomas Swords having a shot after connecting with a Fionn Devoy cross. Callum Leonard headed over from an Andrew Goggin free kick, while John Ging was just wide when his original shot was saved by the keeper but rebounded off him.

Mountmellick went to kill the game off now, Aidan having to make another fine save and David Burke making a goal line clearance.

With ten minutes to go they did so, scoring from the spot after an infringement on the edge of the box.

Again to their credit Portlaoise plugged away, Ben Dwyer and Finn Delaney in on the action as they played some nice ball. They got a consolation goal with minutes remaining, captain Sean O’Sullivan scoring from the spot after the impressive Benedict was brought down in the area.