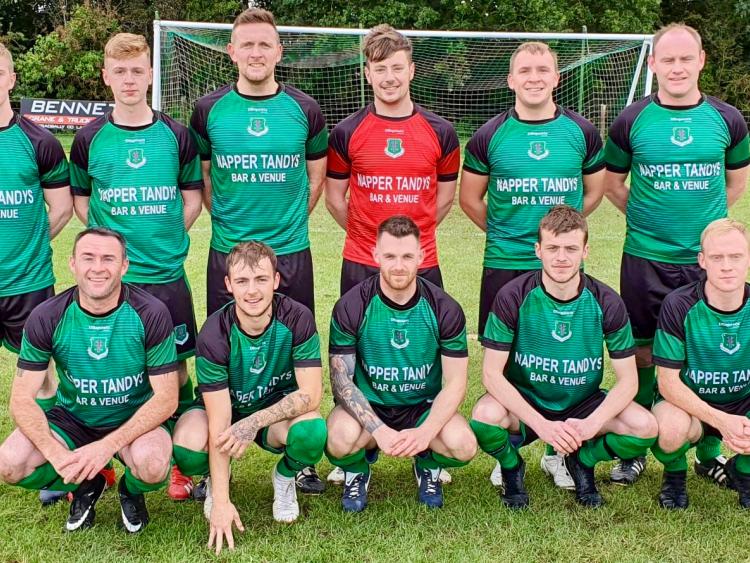 After terrible conditions throughout the night, credit has to be given to Stradbally’s pitch for the terrific condition it was in on Sunday morning last.

Stradbally started strong but were dealt a blow losing the already heavily involved Ray Mulally through injury after just 6 minutes. Alex Conway replaced Mulally and what a debut it turned out to be for Conway.

Within 10 minutes he had his first goal for The Little Town, a nice turn and finish to the bottom left corner of the goal after some great work by Benny Lawlor. Stradbally put together some great passages of play and Conway was on hand to head home his and Stradbally's second from a great cross from Jack Langton.

Highfield weren't going down without a fight and really got stuck into Stradbally and had a sustained period of pressure in the Stradbally half for about ten minutes prior to half time, but the Stradbally back four held firm being well marshalled by Joe Walshe in goals. 2-0 at the break.

The start of the second half was a closely fought affair with no quarter being given.

Stradbally would get the third and crucial goal on the 70th minute mark, Conway was again there to finish after some great work from Damien Murphy and Benny Lawlor.

Conway was on fire at this stage wasn’t finished yet and he scored his fourth of the day with a perfect poachers goal on 82 minutes.

Colin Murphy had another effort hit the bar late on after a great solo run through the Highfield midfield and defence.
The full time whistle went and even though the scoreline would suggest otherwise Stradbally knew they were given a tough game having renewed an old rivalry from their battles against the Birr men in Division 2 a couple of seasons ago.

An overall solid performance from Stradbally Town today where Alex Conway enjoyed his four goal debut and a man-of-the-match performance. Joe Walshe had some fine saves and Richie Ryan and Billy Murphy at the heart of defence were also top class on the day.

Next weekend takes Stradbally to Dublin on Friday Night for the first round of the Leinster Junior Cup against Oliver Bond Celtic of the Leinster Senior League with an 8pm kick off in the DIT grounds, Grangegorman, Friday night October 4th.