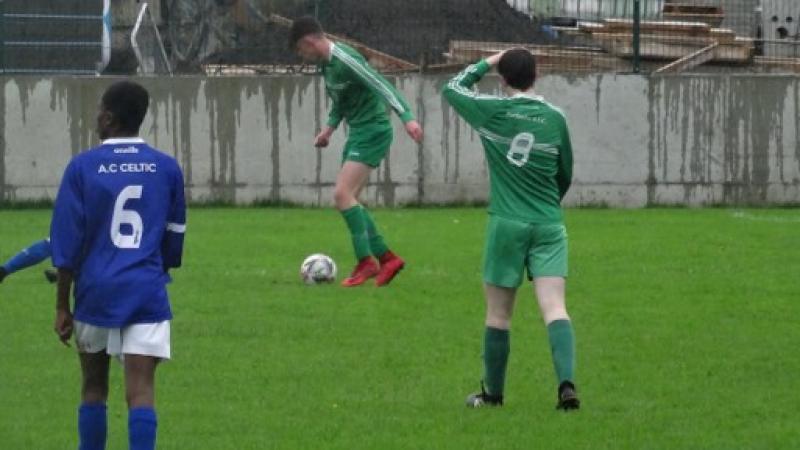 After days of rain Rossleighan Park in Portlaoise withstood the elements to host this Under-16’s SFAI Cup second round tie.

This was a replay of last season's MSL Cup final with Mullingar looking to avenge their defeat this time around.

From the off Portlaoise were on the front foot closing down and pressing brilliantly all over the pitch.

Their early pressure paid off on two minutes as Robbie Farrell won a header in midfield from a Mullingar kick-out, knocking it back over the away defence. Kieran O’Donnell, a centre-half by trade, was the quickest to react beating the keeper to the ball before dinking it over him. Despite the best efforts of the defender the ball found the net,one nil to the home team.

The goal spurred on the home side and they added a second on nine minutes. The same combination again, Farrell with a lovely through ball for O’Donnell to expertly lift the ball over the advancing keeper for a fantastic finish.

Portlaoise kept up their assault on the Mullingar defence, pinning them back for most of the half. On thirty minutes O’Donnell was at it again, smashing the ball to the roof of the net from just inside the box after great work from Cathal Lee to put him through with a pinpoint ball.

Kanya Tshula was running amok on the left wing,making fantastic runs time and time again. Jamie Toman was causing havoc with his darting runs and close control, Colin Mc Evoy, Ben McDonald and TJ Delaney were marshalling the defence manfully as was Kieron Whelan in the midfield holding role.

Just on the stroke of half time a lapse in concentration from the home defence gave Mullingar a free kick on the left wing. They made the most of it as they clawed one back through a header from the inswinging set piece. Cathal Lee was very unlucky not to clear it off the line. Half time and 3-1 to the home team.
The second half started as it would continue for most of the next 40 minutes with Mullingar piling on the pressure, buoyed by their late goal in the first half.

Portlaoise defended really well,never really looking like conceding from open play but free kicks and corners were causing major problems. Mullingar’s dead-ball deliveries were on the money every time, eventually paying off with ten minutes to go as they scored their second goal to make it a nervy last ten minutes.

Portlaoise did create some good opportunities in the final stages but the score would remain at 3-2 with Portlaoise advancing to the third round of the competition.

Mullingar, to their credit, gave a fantastic account of themselves in the second half, turning a game around that seemed at one stage would be beyond them. The home side will be a little disappointed that they didn't control the game a bit better in the second half but will be more than happy to get past a very tough Mullingar team.

There were a lot of very good displays all over the pitch, especially in the first half, but Man of the Match without a doubt goes to Kieran O’Donnell for an all action performance up front and at centre half. A brilliant display.