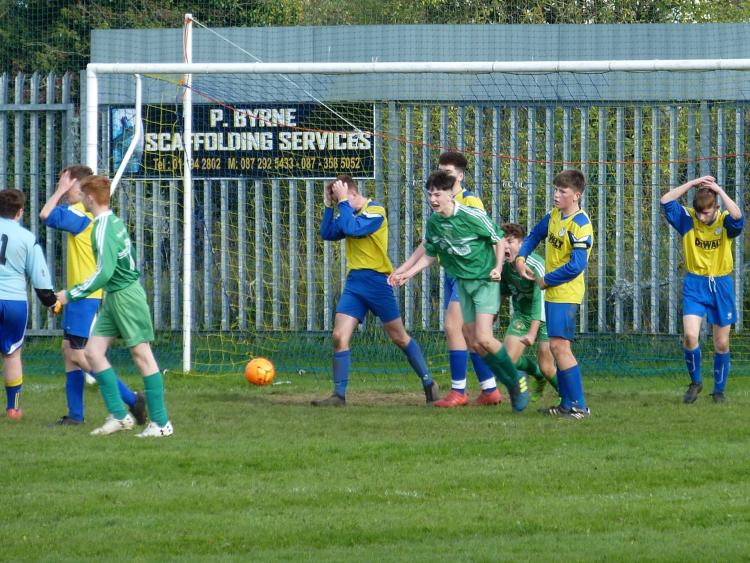 Table-toppers Mountmellick Utd had won all four of their opening games prior to Portlaoise AFC arriving at Conor Davis Park.

Portlaoise AFC were on a mission as they tried to get to the top themselves and knew they would have a challenge ahead, especially as they were missing a number of experienced players.

It was a nervy start for both sides and it was scrappy around the centre third of the pitch, but on five minutes the home side took the lead at the first clear attempt for either side.

Mountmellick won the ball in the middle and the long ball beat the AFC defenders, allowing the striker to run through and make no mistake with the finish into the right corner. 1-0 and the home support roared their side on.

Two minutes later and AFC’s Cathal Lee had a decent chance to equalise. He was forced wide left when on the edge of the box, but after beating the keeper he was unlucky to pull the shot wide as momentum was carrying him off balance.

Half-way through the first half and the equaliser came as AFC were grappling to get back into the game. Ben Doyle was straight in on goal and beat the out-rushing keeper, toe-poking it home confidently after a super through ball from Cathal Lee from the centre circle. 1-1 and time for the visiting AFC support to roar.

Mountmellick had a chance to go back in front from a free directly after the equaliser but the resulting shot was well wide.

AFC’s Jamie Toman had a great chance on 27 minutes but the ball went inches wide as he raced into the left side of the box.

Jamie did have the ball in the net on 31 minutes after a lovely dink through by Ben Doyle, but the referee inexplicably ruled it offside. No need for VAR as the game remained level at 1-1.

Portlaoise were getting more and more into the game in the final 10 minutes of the half, but were still scrappy in possession and Mountmellick were competing and lurking to try and break forward. The sides entered the dressing rooms locked at 1-1.

AFC started the second half strong and Ben Doyle had the first chance but just missed, and another one from Robbie Farrell was blocked down.

Corners came to both sides but no goals. Tension mounted in the tackles and a few dubious refereeing decisions didn’t help either side and created some tension. Jamie Toman chased a Ben Doyle ball into the box and caused the keeper to spill it, but Jamie was unable to poke the ball home from the end line and nobody was home to take an easy goal. Let off for Mountmellick.

All AFC pressure now and gutsy defending by Mountmellick. Robbie Farrell was working his socks off and Imran Shitta was back making tackles in the middle.

On 62 minutes Mountmellick had a corner and a super breaking ball from Jamie Toman sent Doyle in on goal but the keeper expertly saved the shot.

Ten minutes to go saw increasing AFC pressure from Cathal Lee and Ben Doyle in the opposition corner kept the ball in the danger zone, and the enforced corner gave Kieron Whelan a chance of a header but it went just past the top left corner.

A minute later a corner to Mountmellick and Robbie Farrell was forced to clear the ball off the line. Jamie Toman broke away beating the last man near the edge of the Mountmellick box, and ass he sent the ball past the defender he was taken down with nothing given from the referee. AFC took a yellow card for their protests.

Then, Ben Doyle grabbed the lead after a great battle by Jamie Toman again who was lucky to win the corner. The Kanye Tshula corner came in and the scramble on the line saw Doyle blast it home from point-blank range. Five minutes left on the clock and both sides tried for another goal with most chances coming AFC’s way.

The final score at full time was 1-2 to Portlaoise AFC who join Mountmellick at the top of the East Division on 12 points with AFC having a game in hand.