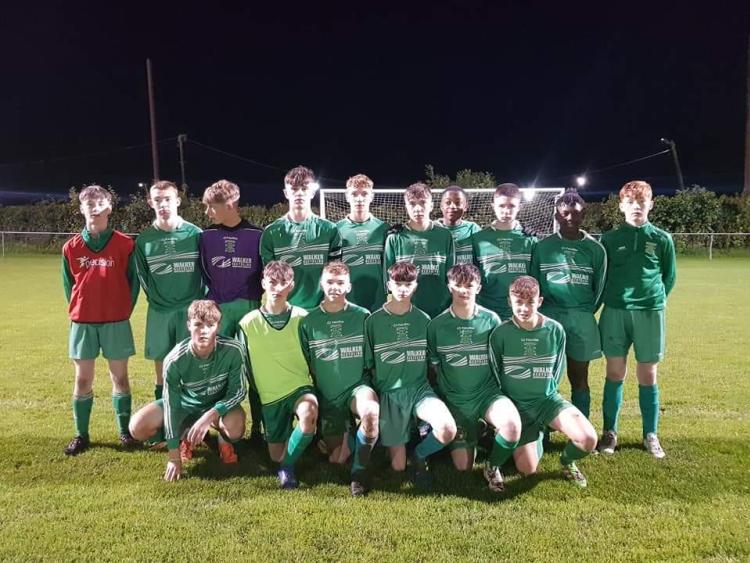 *Portlaoise through 4-1 on penalties

SFAI U-16 Cup Third Round

The pitch was in great condition considering the day of torrential rain that preceded it. These two teams were meeting for the fourth season in a row in the SFAI Cup with Naas proving too strong for Portlaoise on each of the previous three occasions.

Even though it was a game of few chances, mainly down to fantastic defending by both teams, the quality of football on show was of an extremely high standard.

Portlaoise were very happy at half time with their performance, creating three or four good chances through Cathal Lee, Jamie Toman and Robbie Farrell with some brilliant deliveries from TJ Delaney and Kieran O’Donnell in particular. Naas looked dangerous from set pieces having won a large number of free kicks in the Portlaoise half.

The second half of normal time and the first half of extra-time were shaded by Naas as they forced their impressive passing game on the home team. They missed an excellent chance from a corner, sending a free header wide of the post.

Portlaoise felt very aggrieved to have penalty shout turned down after Ben Doyle was taken down in the box. Lee Smith in the Portlaoise goal had to make a great save with his feet from point blank range late in the first half of extra time.

Portlaoise regained the momentum in the second half of extra time dominating the play for the final ten minutes, playing some lovely football in the process.

By the final whistle there were players all over the pitch going down with cramp after both teams had put in unbelievable shifts on what was a very heavy pitch by now.

The dreaded penalties followed. This is such a cruel way to lose a game but a fantastic way to win and unfortunately because the teams were so evenly matched over the 100-odd minutes that's what it came down to.

Portlaoise were first up with Kieran O’Donnell expertly slotting home. Naas sent their first penalty wide but the referee adjudged that Lee Smith had left his goal line. The retaken penalty clipped the bar as it flew over.

Cathal Lee stepped up to make it two for Portlaoise before Smith saved brilliantly with his feet to leave his team two ahead. Colin McEvoy and the Naas centre-half traded successful penalties before Cian Moore stepped up knowing if he scored that Portlaoise were through.

Moore made no mistake with the finish, smashing the ball home to roars of delight and relief from the players and the large crowd gathered on the night.

There were excellent performances all over the pitch. Jamie Toman and Cathal Lee closed everything down, working tirelessly. TJ Delaney and Kanya Tshula were a constant threat on the wings. Ben McDonald was excellent in defence.

The referee’s Man of the Match went to Colin McEvoy who just pipped Kieran O’Donnell for the award. Both had exceptional games.

Portlaoise move onto the South Leinster regional semi-final and the national last 32.