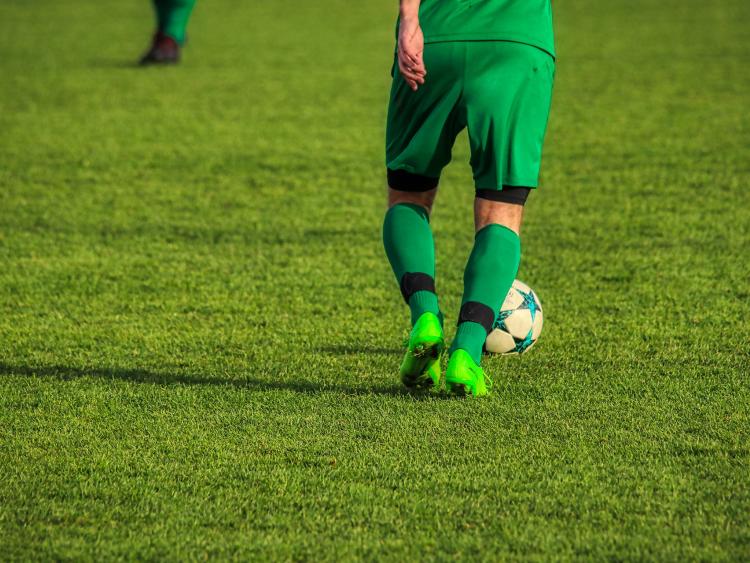 Portlaoise AFC travelled to Naas for a lunchtime kick-off in the KDUL U18 league last weekend.

Portlaoise has merged their U17 and U18 players to form one team to play in the U18 League in Kildare. Playing up a year for a lot of the squad and being in a tough division means this team will be challenged all season long. Portlaoise were hoping to pick up their first points of the season after tough losses to Kildare Town and Athy town in recent weeks.

Heavy rain arrived in Naas just as the teams went out to warm up and the poor weather continued until after half time. Despite the poor conditions the players treated the spectators to a very good game of football.

Portlaoise settled well early and were on the front foot from the off. Finn Culleton and Ben Pedro in centre midfield were busy early on. They dominated the early exchanges and gave Portlaoise a good platform to build from.

The first chance of the game fell to Tiernan Cahill after some good work on the right flank from Mikey Dempsey and Lee Talbot. A fine through ball split the defence for Cahill to run on to but the Naas keeper was out smartly to block his shot.

Dan Adeoye was causing Naas problems dropping in between midfield and the striker. He, Jason Horan and Michael Culliton linked well together and were getting plenty of joy behind Naas down the left.

The first goal arrived after 17 minutes. Adeoye and Cahill pressed the Naas short kick out. The midfield stepped up and won possession high up the field. Dan Adeoye and Jason Horan linked well on the left and Tiernan Cahill was on hand in the box to finish to the net from Horan’s cross. The lead was well deserved and the away team were dominating the game.

Again, pressure across the midfield won the ball back for Portlaoise. Cahill, Adeoye and Pedro combined to win possession and Culleton broke free. Unfortunately, Culleton’s finish across the goal just went wide at the far post.

Soon after and a great cross from the right from Lee Talbot found Cahill in the box but his header was saved. While Portlaoise were dominating, Naas were a threat on the break and Conall Rowney needed to be out smartly from his line twice to deny chances.

Naas are a physically big team and were also a threat from corners. Three first-half corners and three free-kicks into the Portlaoise box caused concern and panic at times but Portlaoise defenders put their bodies on the line to keep a clean sheet going into half time.

Daire McDonald and Kyle Enright did a very good job to nullify the powerful Naas centre forward and both centre backs were willing to venture forward with the ball when given the chance. Kris Reiniks came on for Portlaoise and had an almost immediate effect.

Enright won a ball at the back and good interplay between him, Pedro, Mikey Dempsey and Cahill got the ball wide to Kris. He took on and beat his man and pulled the ball back to Dan Adeoye who finished to the top corner to make it 2-0 at half time.

The second half was less eventful than the first. Portlaoise had a chance to extend their lead after 5 minutes but Cahill’s shot was saved. Naas came more into the game and for most of the second half they were the better team.

Portlaoise were pushed back and forced to defend. While they were under severe pressure at times the defence was playing well and limiting Naas to shots from distance. That changed with 20 minutes left when a good cross into the box was headed to the net powerfully by the big centre forward.

From here on the away team were hanging on. Cody Hannon, Adeoye, Culleton and Cahill were looking a threat on the break but Naas were having most of the play. A small squad on the day meant tired legs could not be replaced and some questionable decisions from the referee gave a corner and a couple of free-kicks to Naas.

Portlaoise’s resilience was eventually broken with ten minutes left. The Naas right-winger won a ball in the corner and picked out a teammate on the edge of the box and his shot gave Rowney no chance. 2-2 with ten minutes left. Portlaoise could have faded from here but credit to the players they dug deep and raised their game again.

Indeed, the last ten minutes and the 7 additional minutes were end-to-end stuff. Both teams were tired, both defences stretched and both sets of attackers going for the winner. Both teams looked like scoring with every attack but somehow the game ended in a 2-2 draw.

Portlaoise are glad to get their first point of the season. The performances so far have been very good even though the results could have been better but the management are happy with the progress.