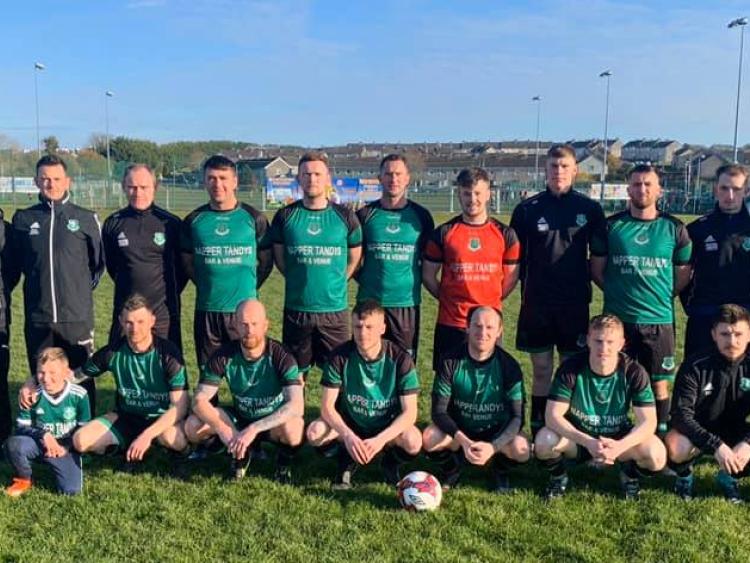 Stradbally Town’s ‘A’ team travelled to Birr to take on Highfield on what could only be described as a crisp and fresh Sunday morning. A credit to the home side for having the pitch in such good condition considering all the foul weather we've had recently.

Stradbally started strong and within 90 seconds were awarded a penalty after Justin Lalor broke through the Highfield defence to flick on a through ball only for a Highfield defender to stop it with his hand. Penalty to Stradbally. Alex Conway stepped up to calmly slot the ball home from the spot.

Stradbally continued to press hard and control the game and they got just reward. Jimmy Langton drove down the right-wing to cross to Benny Lawlor, who's header drew a fantastic save from the Highfield keeper but Lawlor was quickly up on to his feet to smash home the rebound. 2-0 Stradbally Town.

Highfield started to create a few chances and were almost back in the game but for brilliant 1-on-1 save from Stradbally Town goalkeeper Joe Walshe. That brought an end to the proceedings for the first half.

Stradbally started the second period just as quickly as the first one and were very unlucky not to be 3 up after Conway's header just sailed wide from a Langton cross. The game was nip-tuck for a period but Stradbally held firm at the back.

Walshe was called into action with 15 minutes to go, again making a tremendous 1-on-1 stop to keep his clean sheet intact. Stradbally had a couple more chances to increase their lead but found the Highfield keeper in similar form to Walshe and very difficult to beat.

All in all a great result for the men in Green on the road and another 3 points in the bag.

Joe Walshe was excellent in goals keeping his 4th clean sheet of the season. He was well assisted by the Stradbally back four and the midfield who never stopped working all game. Alex Conway, however, just sneaks the Man of the Match award after an unbelievable show of strength, hard work and centre forward play from start to finish.

Stradbally head into the Christmas break just 1 point off the top of the table and will hope to continue they’re recent good form on the resumption in January to mount a strong challenge for the Division 1 League title.