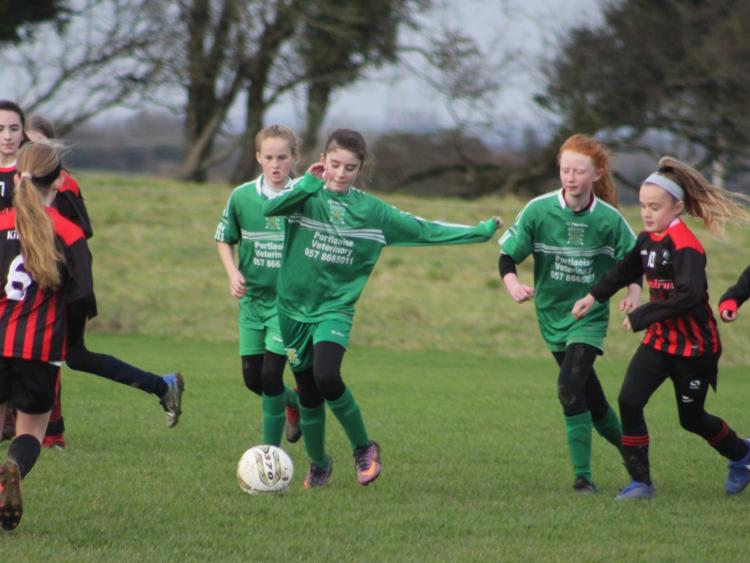 Portlaoise played their sixth League game in Clara on a fresh Saturday morning – a fixture that has been scheduled and cancelled twice before due to weather.

It was third time lucky for the Portlaoise girls as they came out on top in what was a thrilling game that saw some brilliant football from both teams and was end-to-end entertainment.

The game started and it took both teams a few minutes to settle into the game – Portlaoise’s two centre-midfielders Sophie Cullinan and Sadbh McGrath grabbed hold of the game and put some shape on the play. McGrath showed a fantastic engine throughout the game, but the early exchanges were most impressive. The two centre forwards Sophie Doyle and Devine Samuel were making all the right moves, creating space and causing chaos for the Clara defenders. After a little time, space started to open up and the Portlaoise girls could play some football.

Ten minutes in, a brilliant switch of the play from McGrath put right winger Abbey Louise Byrne onto a run, who crossed the ball into the box. The ball was half-cleared only to find the oncoming Cullinan who buried it in style from the 18-yard box, over the keepers head. 1-0 to Portlaoise.

25 minutes into the game, as both teams tested each other, it was substitute Zanaib Ganiyu who read a goal-kick perfectly when she intercepted the short pass, and with sniper accuracy passed it into the net.

Portlaoise were in control at this stage with some excellent midfield play – both wingers had a lot to contribute, Tara Woodcock displaying her usual brilliance on the left, and player of the match and team captain for the day, Abbey Louise Byrne, displayed serious heart, energy and speed up and down the right-wing.

Portlaoise defenders Caoimhe Murphy at right-back, and Aoda Graham at left-back really did keep the Clara wingers quite in the first half and that was no easy task – both Clara wide players were superb from start to finish.

In the last minute of the first-half the ball broke for Clara outside the Portlaoise 18 yard box and a very skilful Clara striker was able to bury the ball into the bottom left corner of Eire Delaney’s goal.

The second half started with Clara, playing with newfound confidence and determination pushing the Portlaoise girls to the limit. Clara showed great passion and some fantastic football as they dominated the early exchanges. Some minutes into the second half a controversial penalty decision was given by the referee to Clara after centre back supreme Victoria Ryan was deemed to have fouled the Clara centre-forward. The penalty was converted and now the game was deadlocked at 2-2.

Ashlee Buchanan who was a second-half substitute brought a new dimension to the game. Her speed on the left wing was unstoppable and she worked exceptionally well with Devine Samuel to create a few chances – on one particular charge both girls worked together to force an own goal from a rushing Clara defender and unfortunately for her the ball went into her own net.

Portlaoise continued the charge, and the energy surged as they went back in front, with continued use of the wings they spread the Clara team wide and a break from Abbey Louise Byrne up the right-hand side saw her through on goal – a one on one chance she blasted the ball past the rushing Clara keeper nearly bursting the net.

All credit to the Clara girls they wouldn’t give up and continued to drive back at Portlaoise – in the last ten minutes they created many chances and their left-winger who was a standout player for the home team took a shot superbly and beat Eire Delaney well – bringing the game back to 4-3.

For the last five minutes Portlaoise were holding on, defending well but under a lot of pressure. One of the very last plays of the game was a Clara attack on goal that was saved by Eire Delaney – her quick thinking got the ball up the pitch to Portlaoise’s only high player – Devine Samuel who controlled the ball perfectly, lifting her head, she had the skill to beat two Clara defenders and then took a wonder strike from outside the box that no keeper could save.