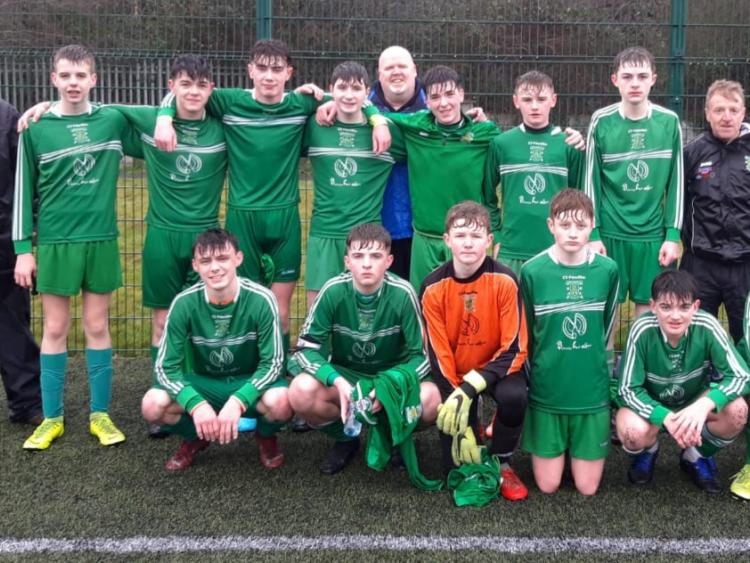 Portlaoise Utd faced Offaly side Mucklagh at the Portlaoise Leisure Centre on Saturday morning last, with kick-off delayed by ten minutes due to a mini storm.

When play started the visitors had the best of the early play, with Andrew Goggin, Tadhg Duffin and Sean O’Sullivan defending well for Portlaoise. Portlaoise eventually got into the game, Ben Dwyer's shot was deflected for a corner with Fionn Devoy’s delivery going right across the goal, but unfortunately, Portlaoise failed to get on the end of it.

Callum Leonard got some vital interceptions in as Mucklagh tried to get some rhythm going. As the half finished, both sides eventually created chances. Aidan Keane continued on from last week by pulling off two fine saves for Portlaoise, while the home side also created two chances, firstly after good play by Finn Delaney and Luke Makem and then Thomas Swords had a shot on target.

Within minutes of the restart, Mucklagh took the lead with a strike from outside the box. Portlaoise reacted quickly with Luke Makem putting John Ging through, but the offside flag went up. Fifteen minutes into the half and Mucklagh doubled their lead, this time a fine run and cross from their left winger was slickly dispatched to the net by their inrushing frontman to make it 2-0.

A test of character now for Portlaoise, and in fairness, they rose to the occasion. Excellent work by Andrew Goggin, Fionn Devoy, Callum Leonard, Luke Makem, Tony Coss, John Ging and Ben Dwyer saw things swing in their favour, however, the Mucklagh defence was holding fine and restricting them to half-chances.

Mucklagh were always dangerous on the break, Tadhg Duffin putting fine tackles in to deny them while Aidan Keane pulled off two more excellent saves to prevent the game being ended as a contest.

With ten minutes left Portlaoise pushed centre-half Sean O’Sullivan up to add to attack in an effort to salvage something from the game. With eight minutes left, Portlaoise won a free-kick on the edge of the box, and Ben Dwyer dispatched it to the net to set up an exciting finish.

From the tip-off Portlaoise won possession and put some neat passes together, resulting in leading scorer Fionn Devoy equalising with a cracker from the edge of the box - a just reward for his work rate and effort in the second half.

Both sides had chances to snatch the winner, Mucklagh shooting just wide with a shot from inside the area, while Tony Coss had an effort after nice play from Sean O’Sullivan and David Burke. Two each the final score, a fair result overall, once again credit to both teams in testing weather, the second half in particular very exciting.