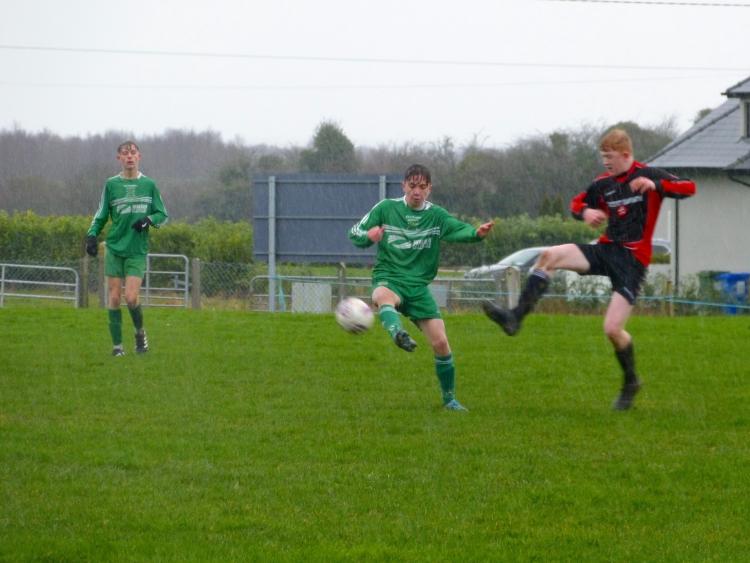 Portlaoise AFC made the long trek on a morning of horrendous weather into uncharted football territory for them as they travelled to play St. Joseph’s FC from Athlone for the first time.

The relentless heavy rain and strong wind on a heavy pitch with long grass in parts was always going to be a significant factor in this fixture and truth be told, Portlaoise AFC really struggled to play their normal free-flowing passing and close control game.

Early exchanges resulted in a couple of half-chances for AFC with Jamie Toman having a shot and Cian Rafter a header, but neither hit the target.

Portlaoise played down the slope of the pitch in the first half and spent large portions of the half in the St. Joseph’s territory without any significant breakthroughs.

St. Joseph’s did have a free kick on 9 minutes from outside the area but it was blasted well over the bar.

With 17 minutes gone, Jamie Toman made a nuisance of himself for the defenders and got a lovely ball across the box but Ben Doyle could not put it away. A minute later, a corner to St. Joseph’s was poorly dealt with at the back by AFC and the second ball was not cleared. The ball in should have been put away by St. Joseph’s attacker who beat the backline but he missed. This game was never going to finish 0-0 in these conditions.

A shot by Joseph’s was saved by Hughie Siler in the AFC goal a few minutes later as they seem to be more direct even though they had less possession.

28 minutes and 1-0 to St. Josephs’s. Two errors at the back for AFC hitting their own self destruct button. Three defenders missed trying to clear the ball and it was then fumbled by the keeper with the next clearance sliced back into the goal area passing the keeper and easily tapped in by the St. Joseph’s attacker. The half-time scoreline read 1-0 with big improvements needed by AFC to get something out of the game.

Jamie Toman forced a corner on 42 minutes with Robbie Farrell trying his luck with an overhead kick but no luck. Toman skied his next effort with the keeper beaten after TJ Delaney and Robbie Farrell fought well towards the end line and box to create the chance.

Ben McDonald crossed quickly after a strong run on the right up the hill trying to encourage the more direct approach and Ben Doyle’s first time half volley went just wide.

St. Joseph’s had the hill in this half and were dangerous on the break. It was for the most part AFC applying pressure desperately trying to get a goal back.

AFC thought they had the equaliser when Ben Doyle leapt to head home on 65 minutes when a very harsh offside call ruled it out for another player adjudged to have affected the goalkeeper.

Ben McDonald’s loss to severe cramp was testament to the conditions and surface and its impact on the players with 10 to go.

St. Joseph’s then had a goal disallowed for the ball being taken out of the keeper’s hands but it could have stood on a different day judging by how much control the keeper actually had on it at the time.

This game could have finished in favour of either side but AFC were still behind until chaos ensued in the box with six minutes to go.

Jamie Toman fed the ball into a packed box and Cian Rafter bravely got injured at the back post trying to head home but in all the confusion Imran Shitta eventually poked the ball home to make it 1-1 and nobody could add to the score in the final minutes making it a battling 1-1 draw at the full-time whistle.