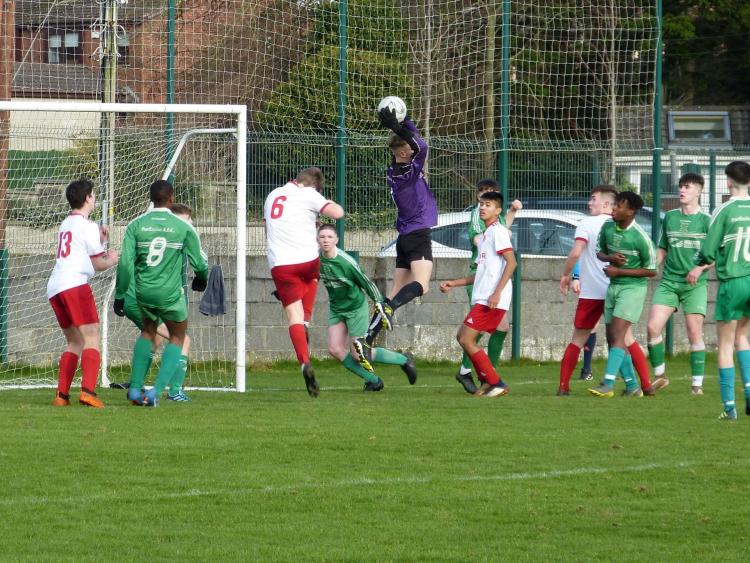 Portlaoise U18’s got their first win of the season in the KDUL Premier league on Saturday last after a strong display against Caragh Celtic.

The game was moved to the Astro pitch at the Leisure Centre in Portlaoise for a later than usual 3pm kick-off.
The home side started well and were on the front foot from the start. They dominated possession from the kick-off and they didn’t have to wait long to get their rewards on the scoresheet.

With just nine minutes played Portlaoise went one-nil up. Some great interplay on the right between Cody Hannon and Daniel Adeoye produced a dangerous ball into the Caragh box and Tiernan Cahill teed up Aaron Brennan to score from 10 yards. Moments later and it could have been two-nil as Lee Talbot and Cody Hannon combined to put Dan Adeoye through but he shot narrowly wide.

On 25 minutes Portlaoise deservedly doubled their lead. A great run through the middle from Finn Culleton set up the goal as his fine through-ball put Tiernan Cahill in with only the keeper to beat and Cahill suly fired to the back of the net.

Caragh Celtic produced their first chance of the half 30 minutes in when they broke upfield at pace. Conall Rowney in the Portlaoise goals made a fine save at his near post and Kyle Enright cleared the ball from inside his box. From here Portlaoise went down the field in mere seconds and Finn Culleton found Dan Adeoye who calmly slotted the ball beyond the advancing keeper into the bottom corner of the net. The score remained 3-0 until half time.

Three minutes into the second half some great football from Kyle Enright, Michael Culliton, Darragh Kelly, Aaron Brennan and James Wheeler led to a corner for the home team. A wonderful delivery from Culliton found Brennan who expertly finished to the net for his second goal of the day.

Tiernan Cahill set up James Wheeler who finished to make it 4-0 in the late stages of teh game. Caragh Celtic pulled a goal back after latching onto a loose pass in midfield, despite the best efforts of the Portlaoise rear-guard to stop the ball rolling over the line.

Portlaoise, however, would have the last word. Good work on the left from Michael Culliton saw Dan Adeoye find Cahill who scored his second of the day. Portlaoise will be delighted with the 3 points which move them up the table with 9 games still to play.