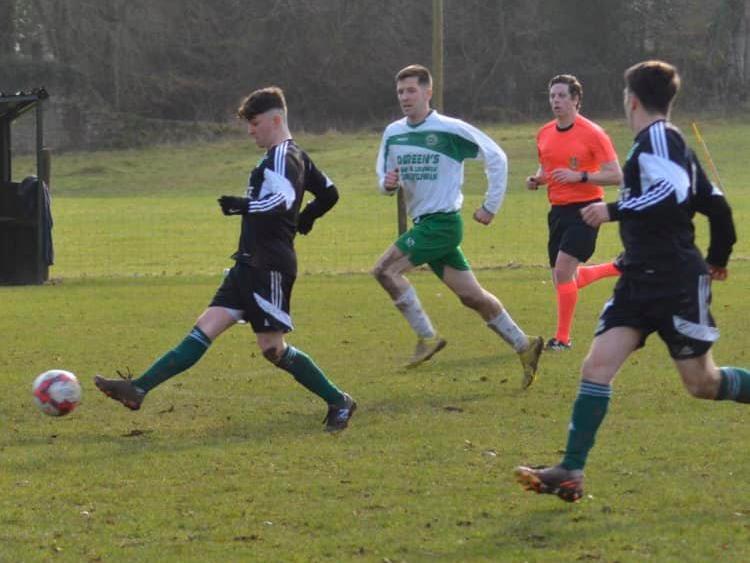 Stradbally Town’s second team pulled off something of a giant-killing at the Lawn in Stradbally as they knocked Offaly side Cloneygowan Celtic out of the Combined Counties Shield.

Cloneygowan had won the league fixture between the two sides before Christmas 6-2, but Stradbally have improved massively in recent weeks and this was their third straight win.

Playing against the breeze in the first half, Stradbally started well with Liam Clancy and Luke Kelly, in particular, causing problems with their pace down the wings.

We had to wait until the 25th minute for the game’s first goal - and what a strike it was. Some lovely play up the left-wing involving John Clancy, Liam Clancy and Murtagh Condron saw Sean Devoy step over the ball and leave it for Richard Carolan who took one touch before firing it low into the bottom corner.

The strike was from all of 30 yards and was a finish that another right-footed left-back, Denis Irwin, would have been proud of.
Cloneygowan tried to get back into things before half time but with Eamonn Delaney and Noel Delaney rock solid at the back, they were reduced to speculative long-range efforts which didn’t trouble keeper Sean Murphy.

The Division 3A leaders were a different side in the second half as they struck the crossbar and then the post in quick succession.

Stradbally regained their composure and when Sean Devoy intercepted a pass deep in the Cloneygowan half he charged towards goal and showed great composure to dink the advancing keeper and made it 2-0.

Stradbally had other chances through Colm Clancy and Derek O’Gorman but they were caught with 12 minutes to play when a high ball found the Cloneygowan striker who finished well.

After that, it was backs to the wall stuff but Stradbally stood firm and saw out what remained to advance to the last eight of the competition. An impressive team performance but special mentions to Luke Kelly, Richard Carolan and Murtagh Condron who were excellent for Stradbally Town on the day.