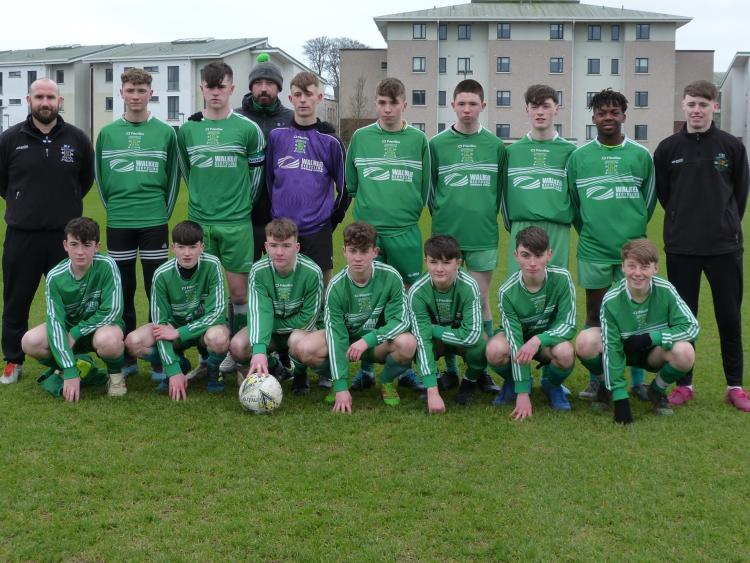 Portlaoise AFC had ventured north last time out to Louth and headed south on this occasion to Villa FC in Waterford as they continued their National adventure.

Storm Ciara did her best but she couldn’t blow this SFAI National last 16 tie away in Ozier Park, Waterford City but the wind was a huge challenge for both sides blowing from one end of the pitch to the other.

AFC started with the wind in their favour but started very nervously in the opening exchanges. Villa started strongly and after only 3 minutes, they had a goal disallowed for handball in the build-up from a corner after good defending by Cian Rafter when there was a lot of room for the Villa number 9 to run into.

From the awarded free-kick for the handball, Jamie Toman could have scored when one on one with the Villa keeper. The keeper had a second chance to gather when Toman was so close to getting his shot away. A good opportunity missed for AFC and they needed to make them count at this level now.
Halfway through the opening half, Portlaoise AFC were steadying a little in a physical but fair battle.

With 22 minutes on the clock, Portlaoise breathed a huge sigh of relief as the Villa winger rolled the ball across the goal with the AFC defence caught, but fortunately for the visitors there wasn’t a Villa attacker to be seen.

Then, Lee Smyth in AFC’s goal sent a huge kick to the Villa half seeing the keeper a mile out. The keeper could only chest and head it under Cian Moore’s pressure. Toman was there to pick it up and had a pop from 35 yards but his effort just shaded wide right. End to end the whole way through this contest.

31 minutes in and Toman left Villa’s stocky number 6 on the floor on the sideline after a tussle and he then forced another defender to come out to try to stop him. They tempted from the resulting set-piece, but the inswinging corner was a fraction too high for Colin McEvoy at the back post.

Portlaoise were much more settled at the back as the half progressed and the last action of the half saw Kieran O’Donnell fouled while breaking away from the defender and won a free kick in a decent position. Unfortunately, the free-kick went high and wide as the half-time whistle sounded with the scoreline still stalemate at 0-0.

Just after the restart, Ben Doyle’s outside of the boot slide pass sent Toman in and he had a chance but was unlucky to miss after taking out two defenders.

The end to end nature continued with Villa coming out the stronger in the second half with another let-off for Portlaoise as the big opposing number 8 sliced wide from all of 6 yards.

50 minutes in and penalty to Villa. The attacker should have been dealt with on the wing before getting anywhere near the box but was taken down between three AFC defenders. The penalty was calmly slotted away and the duck was broken. 1-0 to the home side.

Disaster struck for Portlaoise AFC next and it was 2-0 less than two minutes later when a corner for Villa was headed off the post and the rebound was buried into the middle of the net. Portlaoise were just static while Villa were lively all around the box.

Villa were on top now but Ben McDonald sent a lovely ball just after that second goal to Cian Rafter at the back post but his header beat everyone and also the far post. A gaping opportunity, but still 2-0.

Portlaoise, with nothing to lose, pressed forward and tried to battle back. Cian Rafter showed great bravery at one point when he threw himself into the outrushing keeper and luckily both got up after. Toman had a go on the volley just after, but that went just wide after a good header from Cian Rafter to tee him up.

Villa effectively ended the game as a contest when it became 3-0 from a well-worked opportunity around the box, and with plenty of space around the edge of the box the number 8 made no mistake.

Final score 3-0 and the end of a wonderful proud run by Portlaoise AFC at national level. The scoreline was probably a bit harsh, but taking chances and astute defending were the differences as well as a few key AFC men unavailable.