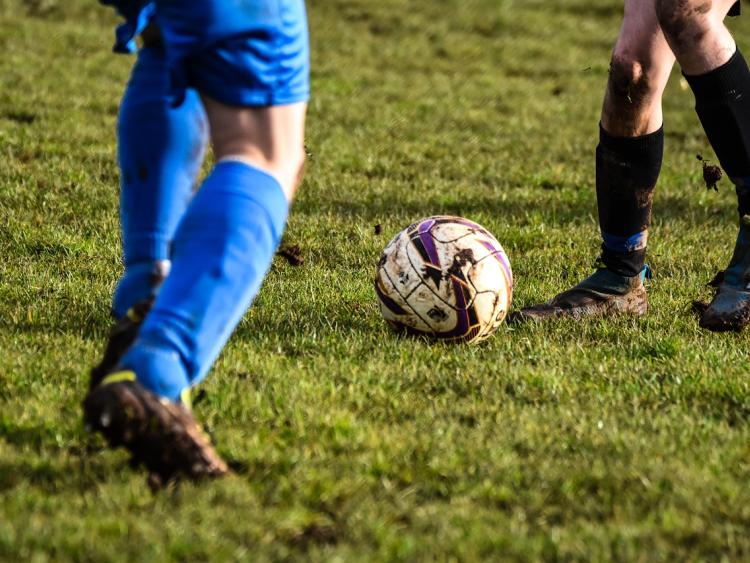 Portlaoise won the toss and opted to play against the wind in the first half. Despite the wind, Portlaoise settled quickly. Goalkeeper Conall Rowney had to go short with all his kick-outs but the back four of Lee Talbot, Ben Pedro, Kyle Enright and Michael Culliton were always willing to receive the ball and were confident playing their way out. In the first half, Portlaoise were patient with the ball and moved it up the lines through the lines effectively.

They only had to wait six minutes for the opening goal as Finn Culleton received the ball high up the field and surged forward into the box to score. On 10 minutes, Tiernan Cahill doubled the Portlaoise lead. Finn Culleton linked with Dan Adeoye who played Cahill in and he finished expertly.

Five minutes later and Newbridge got a lifeline. The away team got a free-kick 22 yards out and although Conall Rowney made a good save, the Newbridge striker was on hand to finish to the net.

Credit to Portlaoise, they kept their composure and kept moving the ball well around the pitch. Mikey Dempsey and James Wheeler were a constant threat down the wings and the home team made chance after chance. A free-kick from Darragh Kelly fell to Tiernan Cahill in the box and his shot was well saved, but Dan Adeoye finished the rebound to the net.

On 30 minutes Darragh Kelly sent Cahill free and this time he made no mistake to make it 4-1. The home team were on top now and threatening to run riot with chances every couple of minutes. The elements, however, played a big part in the next goal. The Newbridge keeper played the ball straight down the middle of the pitch. A slight touch off the centre-back and a huge bounce aided by the wind, and the ball ended up in the Portlaoise net to leave the score at 4-2 at half-time.

Daire McDonald and Kris Reiniks were introduced at half-time as Portlaoise continued to dominate. Ten minutes in and a great cross from Lee Talbot was headed onto the post by Finn Culleton. Adeoye thought he scored but a defender on the line stopped the ball with his arm. Captain Ben Pedro stepped up and made no mistake from the penalty spot.

Against the run of play, Newbridge scored after a scramble in the box where Portlaoise players were adamant keeper Rowney was fouled in the build-up. Minutes later, Portlaoise made it 6-3 as Adeyoe broke free and finished smartly at the near post.

Jason Horan, back after a long injury layoff and Cody Hannon were introduced and they immediately had an impact linking to create chances for Adeyoe and Darragh Kelly. The last goal of the game made it 6-4 as the Newbridge striker outmuscled the Portlaoise centre-half and finished smartly.

Portlaoise’s attacking players will be disappointed with the chances they squandered in the second half but the team will be happy with their overall performance after four weeks without a game. Their defence will know they will need to tighten up but they will be happy with how they played out in possession from the back and used the ball so well. The squad are getting back to full health after some injuries and look forward to the quarter-finals of the Youth Cup against Carragh Celtic in the coming weeks.