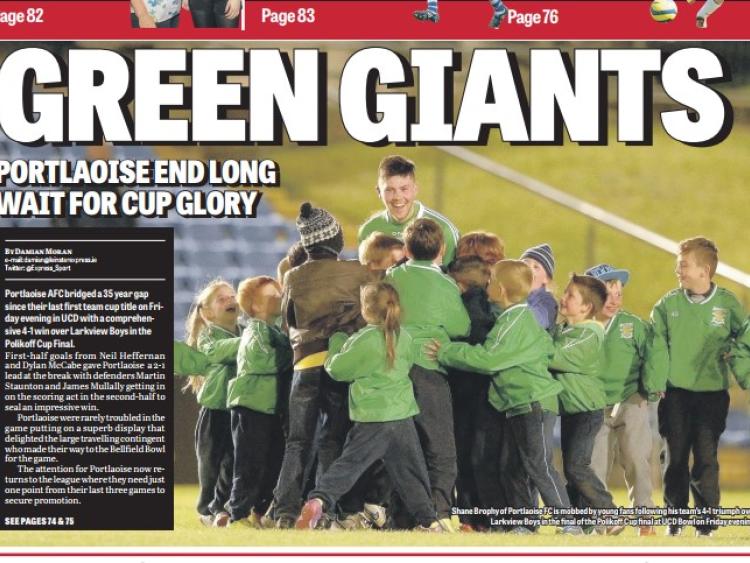 *This article was originally published in the Leinster Express on May 5, 2015

Portlaoise AFC's first team ended a long 35-year wait for a cup on Friday evening with a hugely impressive 4-1 win over Larkview Boys in UCD.

Portlaoise dominated from start to finish and could easily have won by more had it not been for a superb display from Larkview keeper Sean Berry who made a string of superb saves.

Portlaoise made the dream start with goals from Neil Heffernan and Dylan McCabe inside the opening seven minutes. Larkview pulled one back with a spectacular volley from outside the box from Shane Collins but the Dublin side rarely threatened the Portlaoise goal after that.

Portlaoise continued to pile on the pressure but Larkview were playing five in midfield and were proving a difficult nut to crack.

The all-important third goal came eight minutes after the restart through left-back Martin Staunton with attacking centre-half James Mullaney claiming the fourth with 15 minutes to go from a corner.

Portlaoise have been in excellent form since Christmas and they saved one of their best performances for when it mattered most in the cup final. Their passing was sharp, the tempo was high and their work- rate never dropped for the 90 minutes.

The back four dealt comfortably with Larkview’s attacking threat with the storming forward runs of James Mullaney a real feature of the game and Martin Staunton getting forward to score an excellent goal.

Neil Heffernan and Dan Dunne bossed the midfield sector with Dylan McCabe and Shane Collins ever willing runners on the wings. Despite being very tightly marked throughout the game, Paul Cahillane was his usual influential self playing just behind hard working striker Jason Murphy who picked up the man of the match award.

For Larkview, goalkeeper Sean Berry was outstanding, David Walton put in a strong display in the holding midfield role while substitutes Dean OKelly and Stephen Fitzgerald made a good impression once introduced.

Larkview set out their stall to frustrate Portlaoise play-ing four at the back, a line of five across midfield with Shea Cromwell up front on his own. However if the plan was to keep a clean sheet and pinch a goal on the break, it didn’t work as Portlaoise scored two goals inside seven minutes.

The first came after a great run from the back from James Mullaney. He made his way into the box and whipped in a dangerous cross that was only half-cleared. It fell to Neil Heffernan on the edge of the box and he calmly slotted the ball home.

The second was a gift when a terrible back pass put Sean Berry under pressure and Dylan McCabe was on hand to round the keeper and place the ball into the net.

Against the run of play, Larkview struck back with a superb goal when Kevin Byrne unleashed a thunderous, dipping volley from outside the box. Mick Nolan managed to get his hand to the ball but couldn’t keep it out of the net.

Portlaoise piled on the pressure for the remainder of the half with Paul Cahillane twice denied by Berry, one from a wickedly dipping and swerving free-kick. Dylan McCabe also went close with a header but once again Berry denied Portlaoise.

The all important third goal eventually came however within eight minutes of the re-start. Left-back Martin Staunton, who has played up front this season, latched onto a ball from the right wing. He went around two challenges before finishing with style with his right foot under the advancing keeper.

Larkview were forced to abandon their defensive style and changed to playing two up front which left space in behind for Portlaoise to attack.

Jason Murphy almost made it four when he got in behind the defence but again he was denied by Sean Berry who stood up well to save. Berry also Shane Brophy when he tipped the ball over after the Portlaoise man hit a powerful shot from a narrow angle.

There were half chances at the other end for Portlaoise with one flicked header from Shane Brownlee hitting the post. However, the better chances were coming at the other end and the fourth goal eventually arrived from a cor-ner after another double save from Berry.

Shane Brophy swung in the corner and while Martin Staunton won the initial header, the ball deflected off James Mullaney’s shoulder and went into the back of the net for the centre- halfs first goal of the season. There was time in the final minutes for one more highlight when Mick Nolan pulled off a superb acrobatic save, diving almost backwards to deny Kevin Byrne.

The frantic pace of the game finally dropped in the last ten minutes as Portlaoise coasted to a 4- 1 win with captain Jonathan Savage, who played through an injury, proudly lifting the Polikoff Cup much to the delight of the large contingent of Portlaoise supporters who travelled to Dublin for the game.

The official man of the match award went to Jason Murphy who ran himself to a standstill up front for Portlaoise. James Mullaney, Martin Staunton, Neil Heffernan and Dan Dunne could not have been far behind.

What an outstanding team display. Composure, confidence and class from what is a very team

Two goals inside the first seven minutes. You couldn’t ask for a better start.

Good display from Anto Carey and his officiating crew

Tonight we’re going to party like its 1980, the last time Portlaoise’s first team won a cup

Plenty on the field but the supporters from Portlaoise, young and old, deserve a special mention. Great support, great atmosphere.

Also a special mention for Larkview who had 11 mascots from Portlaoise as they came on to the field. Very nice touch from the Dublin side.