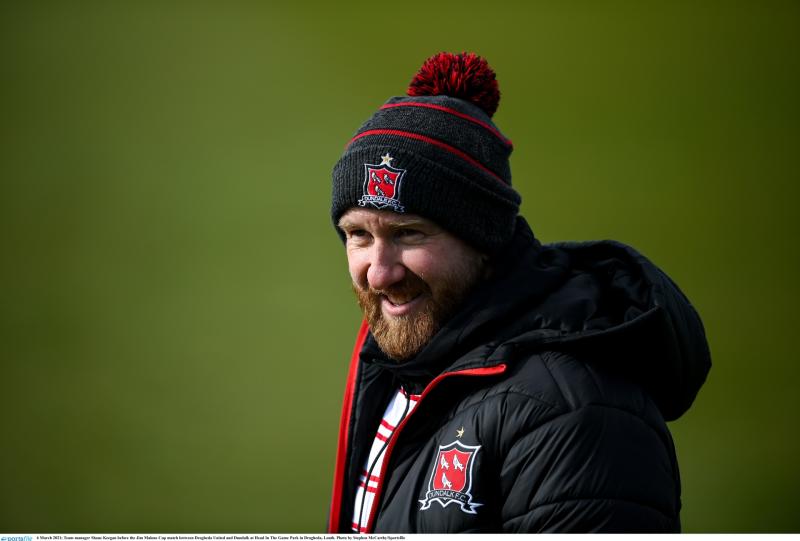 Team manager Shane Keegan before the Jim Malone Cup match between Drogheda United and Dundalk at Head In The Game Park in Drogheda, Louth. Photo by Stephen McCarthy/Sportsfile

Laois native Shane Keegan will have the final say in team affairs at League of Ireland big guns Dundalk FC but the buck will stop at the Rathdowney man's desk according to the head of football at the Louth soccer outfit.

Dundalk FC sporting director Jim Magilton insists that responsibility will be shared within the entire coaching structure, after Keegan was announced as the new team manager this week.

Keegan, who oversaw the Malone Cup win over Drogheda United and defeated Shamrock Rovers in the Presidents Cup, will work as part of a restructured backroom team, alongside Filippo Giovagnoli and Giuseppe Rossi.

Having previously managed Wexford and Galway United, Keegan initially moved to Dundalk in early 2020 as opposition analyst before stepping into a coaching role after that.

“Shane is designated team manager, but we’ve a coaching team around him,” said Magilton.

“Filippo, Giuseppe, Stephen McDonnell and Graham Byas – we’ve got a whole new coaching structure in place that we’re very pleased with and moving forward, we see that as the best way for us to progress as a football club.”

Having only signed a permanent contract as head coach with the Oriel Park outfit last December, Giovagnoli will now take a step back and instead assume the role of coach.

Giovagnoli does not currently possess the requisite Pro Licence, which cost Dundalk FC a €50,000 fine from UEFA last season for a charge that was described as ‘shadow coaching’.

“Filippo and Giuseppe have now engaged with their parent association – the Italian FA,” added Magilton.

“They have got written permission now to apply for any other courses outside of Italy which is fantastic. Giuseppe has now applied for the A Licence with the FAI and is waiting to get the approval and Filippo’s the same. Unfortunately for Filippo, the new Pro Licence course doesn’t start until 2022."

“We’re trying to work with UEFA and get him on the coaching badges to get him on his coaching ladder for the Pro Licence. We acknowledge that for us to be competitive, we need a coaching structure in place that’s going to develop the best young players and also to work with the best players at our football club.”

In a press conference that was held at Oriel Park, Magilton confirmed to the media that Giovagnoli would not be exclusively picking the team for the coming season.

Instead, the Italian’s input will form part of a ‘collective’ decision when it comes to team selections for the new campaign, which begins with Friday night’s President’s Cup match.

“If you ask any coaching setup within the League of Ireland, there’s lots of people that get involved,” Magilton said in defence of this new arrangement.

“Ultimately, one person makes that decision, but you would like to think that collectively, they’ve come to that decision. Then you deal with what happens in the game and you work with the coaching staff around you and then you make the necessary changes in the game too.”

It is understood Keegan will have the final say, with Magilton insisting that although there will be a collective responsibility, the majority of such lies with the Laois native.

“Yes, of course it does,” said Magilton when asked whether or not the buck will stop with Keegan who has also taken up the reigns with at his home hurling club Rathdowney Errill in Laois for 2021.

“Ultimately, performances stop with the manager and we look at all aspects of that, but we’re in this collectively. We all take responsibility in performances no matter what. You look at a performance and give your opinion."

“We all have an opinion on the game, but collectively, the group will look at it in all ways and use opportunities to reflect on this and we’re going to do that as a group,” he said.