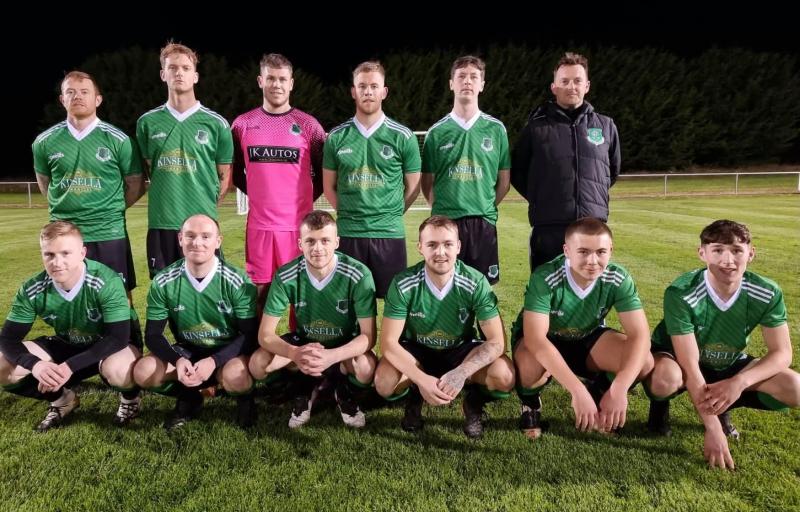 A super advertisement for local football under the lights on a perfect pitch in Gainstown Friday night where the top two in Division 1 faced off in what turned out to be a cracker.

After some early Mullingar pressure Stradbally grew into the game and it was an even affair until the away side took the lead when Gary Comerford intercepted a poor kick out from the home keeper who was trying a cheeky ball short to his centre back only for Comerford to snap on it and tap home on 42 minutes.

The lead didn’t last long however and the home team equalised on the stroke of half time when they thundered in a header from a corner kick. 1-1 at the break.

The second period had barely started when Ciaran O’Neill dribbled his way into the box and from a tight angle he rifled the ball into the opposite corner of the Mullingar net. Again a very good ball playing Mullingar team came down the field and split the away defence with a super through ball for their striker to finish low to Wayne Comerford’s left.

The Home side then took the lead after the Ref adjudged that Richie Ryan had handled in the box and they scored the resulting penalty, 3-2 on 61 minutes. Stradbally roared back and were awarded a penalty of their own on 67 minutes when Benny Lawlor was tripped in the area and Gary Comerford made no mistake from the spot.

The game could have went any way at this stage with both teams playing some outstanding football but it was the men in green who went back in front on 79 minutes when a Benny Lawlor corner kick found his cousin Gary Comerford lurking at the back post to head home to complete his hat-trick.

An onslaught from Mullingar in the last few minutes seen an amazing goal line scramble when somehow a combination of Wayne Comerford, Richie Ryan and Keelan Barry cleared the ball when everyone watching on was waiting for the net to bulge, a huge moment in the game considering Stradbally broke up the field and new signing Mark Wolfe dribbled past a couple of defenders to shoot a lovely low finish from 10 yards to the keepers left to send all three points back to Laois.

A terrific game where both sides have to be complemented with quality on display throughout. Stradbally go level on top of the table now with the Mullingar outfit on nine points each with the Westmeath men having played a game extra. In an all round fine team display Gary Comerford, Keelan Barry and Ciaran O’Neill were excellent on the night.