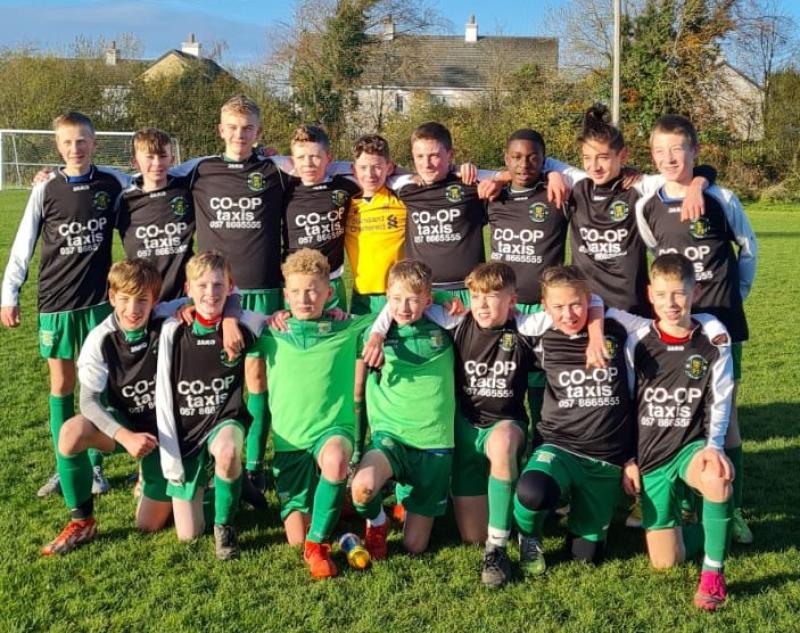 A superb first half brace from midfielder David Wajrack helped Portlaoise overcome a resolute Mullingar in an exciting cup match last weekend. Following some early season jitters, Portlaoise have now gone on a ten match unbeaten run that has seen them march to the top of the league and into the semi-finals of the cup.

Much of the credit for this run must go to Head Coach Kevin O’Brien who threw off the shackles after their indifferent start, ditched the defensive 5-4-1 formation, and adopted a more offensive approach.

This has not only delivered more goals but strangely enough also solidified their defence, as evidenced by five clean sheets in the same period. On a lovely Saturday morning in the Portlaoise Leisure Centre, early pressure from the Portlaoise attacking duo of Dan Downey and Ciaran Hogan put Portlaoise on the front foot.

This resulted in two chances for Portlaoise in the first five minutes. However, the Mullingar keeper repelled both efforts with fine saves.

Portlaoise continued to pile on the early pressure and seven minutes into the match, Wajrack fired in an unstoppable shot from the edge of the area following a mazy dribble. A well-deserved lead for Portlaoise.

This seemed to spur Mullingar into life and following one lightening counter-attack they almost snatched an equaliser, only from some alert keeping by Daire Brosnan to thwart them. Mullingar continued to pile pressure on Portlaoise for a ten-minute period but the Portlaoise defence of Philip Kacprzak, David Timmons, Tiernan Lawless and Jayden Murphy held firm.

In the last ten minutes of the first half Portlaoise regained control and were driven forward primarily by Murphy from left full-back who, ably supported by Barry Conroy, was a constant thorn in Mullingar’s side.

Despite continuous pressure though, the second goal wouldn’t come. After 20 minutes Portlaoise made some changes by bringing on Sean Conka, Shane Carroll and Harry McGree.

The impetus of three pairs of fresh legs brought immediate dividends when pressure on the Mullingar defence from Conka resulted in a loose ball falling to Wajrack on the penalty spot. He made no mistake and calmly side-footed the ball home. Two-nil at half time.

The pattern of play, whereby Portlaoise pressed forward, continued at the start of the second half as the Portlaoise midfield trio of Barry Conroy, Callum Devoy and Harry O’Neill gained the upper hand.

Their neat passing and constant movement caused the Mullingar midfield all sorts of problems. Following one such passing move and a shot come cross from McGree on the left hand side, Shane Carroll added a third with a sweet volley from just outside the six yard box.

A fourth goal in the final minutes of the game, following a run and clinical finish from Sean Conka appeared a bit harsh on a skilful and committed Mullingar side who found that lady luck had deserted them on the day.

Man of the Match must go to David Wajrack, who helped himself to two goals, while also dominating the midfield exchanges throughout. Indeed, were it not for the woodwork, a brilliant reaction save from Mullingar’s excellent goalkeeper and some bad luck he would have gone home with the match ball.

A notable mention also goes to both full-backs, Murphy and Kacprzak, who never put a foot wrong when defending and took every opportunity to get forward. Having overcome an extremely tricky tie, the reward for Portlaoise, aside from a place in the regional semi-finals is a spot in the last 32 of the National Competition.

Portlaoise now enter the second half of the season in good shape and with confidence in an attacking formation that might just deliver some silverware at the end of the season .