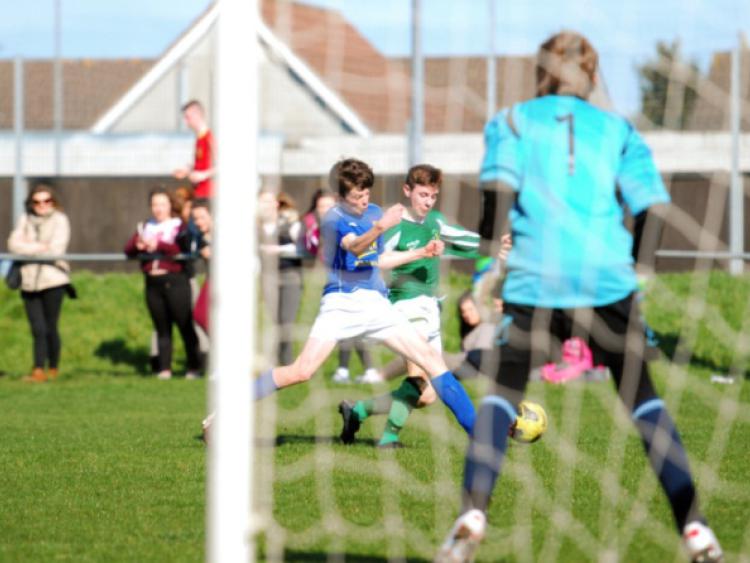 Portlaoise are now six points ahead of Tullamore at the top of the table with each having played 12 games and each having six matches left to play after this hard fought victory in Rossleighan Park last Saturday.

Portlaoise are now six points ahead of Tullamore at the top of the table with each having played 12 games and each having six matches left to play after this hard fought victory in Rossleighan Park last Saturday.

Tullamore started the better and gained the upper hand in midfield and had two good chances in the first 10 minutes but their efforts were just wide on both occasions.

Tullamore then took took the lead on 20 minutes when their midfielder burst through the Portlaoise defence and shot low into the bottom corner to make it 1-0.Tullamore nearly doubled their lead on 30 minutes but Sean McCormack made a magnificent stop to deny the Tullamore centre forward.

Soon after Aaron Wright was just wide when put through by good work by Aaron Feane and Jack Langton and it finished 1-0 to Tullamore at the break.

Portlaoise took the field for the second half in determined mood and dominated midfield from the start and on 50 minutes Aaron Wright made it 1-1 when he controlled a pinpoint cross from Ross Brennan and slipped the ball under the Tullamore keeper.

Five minutes later the Tullamore number 10 broke clear on goals but good defending by Jason Maher averted the danger and a minute later Sean McCormack made a great stop to deny the same player.

On 60 minutes Joe Nevin made a great run down the right wing and his cross was met on the volley by Ronan McEvoy but the Tullamore keeper made a good save. Soon after Portlaoise did score when great defending by Niall Doran sent Jack Langton away on the right and he passed to Ronan McEvoy on the edge of the box and he finished in style to make it 2-1.

That was the end of the scoring as both side cancelled each other out in the final 20 minutes and no clear cut chances were created. Best for Portlaoise were Sean McCormack, Niall Doran, Jason Maher, Brian Sheehy, Charlie O’Brien, Jack Langton, Ronan McEvoy, Aaron Wright and man of the match Ruairi Lewis.