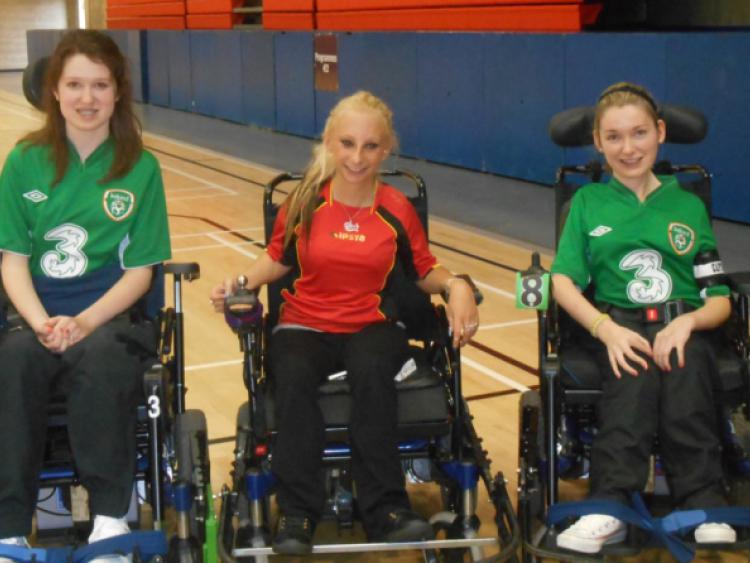 Aoife McNicholl, a second year Psychology student at DCU, and Emer O’Sullivan, who is entering 5th year at Scoil Christ Ri, were members of the Ireland team that took part in the inaugural European championships, hosted in Limerick, from the 17th to the 21st of July.

An excellent 2-0 win over Switzerland preceded Ireland’s 1-1 draw with Denmark. Emer’s goal in this game proved vital as it ensured the team progressed to the semi-finals where they went down to an extremely strong France team that eventually went on to win the competition.

Unfortunately, it was to be heartbreak for Ireland in the third place play-off, with Belgium winning an extremely close match in a penalty shoot-out after extra time had been played.

The Irish side’s fourth place finish has resulted in qualification for the powerchair World Cup to be held next year.

On top of this, with a series of impressive performances, Aoife McNicholl was awarded the ‘Player of the Tournament’ by unanimous decision of the international coaches.

Overall, the tournament has been very successful for Irish power chair Football. Aoife, the Irish captain, said afterwards “It was an unbelievable experience.

Both the organisation of the competition and performance of the team confirmed Ireland’s arrival at the top table of the international game.

We can now have genuine aspirations to do well in the World Cup in 2015 and I hope we see our national game go from strength-to-strength in terms of participation and support.”

Powerchair football is one of the fastest growing disability sports in the world and allows people who are power wheelchair users to participate in the sport.

Powerchair football came into existence in the late 1970s in France but has only been played in Ireland since 2003. Games are contested by teams of four players who, over the course of two 20 minute halves of action, push or strike an oversized football around a court, attempting to outscore their opponents in the same way as mainstream football.

Originally, powerchair football was played sporadically at tournaments organised by Muscular Dystrophy Ireland (MDI) before the FAI’s ‘Football for All’ programme arrived and the Association of Irish Powerchair Football (AIPF) was set up in 2009.

There are a number of clubs throughout Ireland with Aoife and Emer being members of local Midlands United Club.