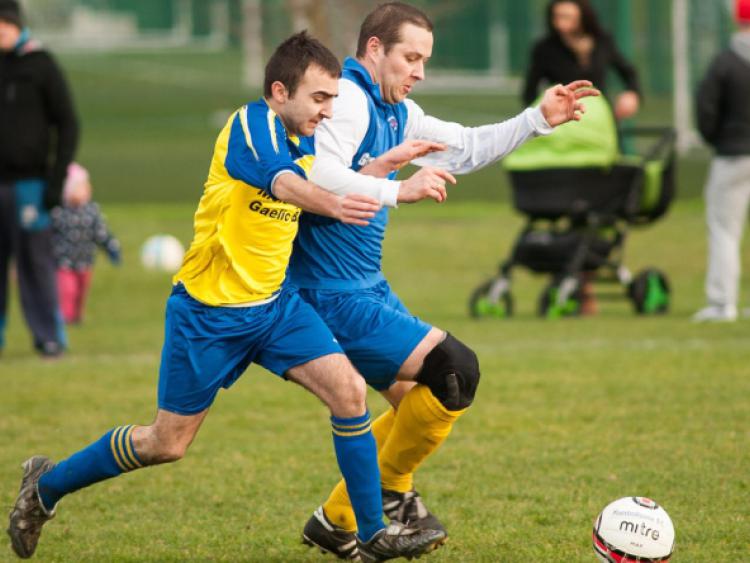 All this week’s soccer news from clubs around Laois. To have your club included e-mail damian@leinsterexpress.ie before 9pm each Sunday

All this week’s soccer news from clubs around Laois. To have your club included e-mail damian@leinsterexpress.ie before 9pm each Sunday

Arlington remained in the hunt for league honors with a hard fought win over Tullamore side CK United.

Arlington did all the hard work in the first half and raced into an early 3-0 lead. Quick movement and accurate passing saw the CK defence opened up on a number of occasions and two expertly taken goals from Barry Kenny and the other from Joe Gorman gave Arlington vital breathing space.

The second half was a more even affair as Arlington sat back on their lead, but always looked in control at the back with James Gallagher and Joe Tully sweeping across the back.

The away side  still looked dangerous on the counter attack and could have added to their lead with Daryl Foy and Oleg Shiskarev breaking down both wings and chances falling to Joe Gorman, Shaun Pierre Cretaro and the hard working Barry Kenny.

LOFFA FC are idle this week and wont have another game until the weekend of 12th of January. Players will be provided information through our Facebook group of any non competitive action during the festive season. In the meantime, training on Wednesday and Fridays will continue as scheduled or when possible.

There is one other event, we are having our Christmas Party ‘The Twelve Pubs of Christmas’ in Portlaoise on Saturday, December 14. For further details, see our Public Facebook page or else talk to Michael Power.

Finally, we would like to wish all the players, management and all who helped contribute to the club a very Merry Christmas and a prosperous 2014.

Maryborough moved their winning streak to three with an assured performance against Mountmellick. It was the second time in a week for these teams to meet but it wasn’t as one sided as last week’s match.

Even though Maryborough took the lead early through a Philip Lewis header, Mountmellick were always threatening but some poor finishing and good goalkeeping kept Maryborough in the lead at half time. Maryborough sealed the win with three goals in the second half, two from Michal Cala and one from Piotr Socha. A late Mountmellick goal was the only blemish.

They will head into the Christmas break confident of having a successful 2014 with the team in two cup competitions and with an outside chance of promotion.

We would like to thank everyone who attended our poker night last Friday. It was enjoyable night and we hope everyone had some fun. We would also like to thank anyone and everyone who has helped the team in 2013 and wish all our families, friends and supporters a Happy Christmas and a Prosperous 2014.

As we reach halfway mark in the season our U-11 & U-12’s sit on top of their Divisions. Our U-14’s are in second place as are out youth team. Our U-16’s clinched the league title unbeaten with two games to go. Well done to all our players and their families for their continuing support.

Our annual xmas draw is on Friday, December 20 in AJ’s Clonaslee tickets on sale now. All proceeds from the door and draw go to the Oncology Unit at Tullamore Hospital. Entry Fee: Donations, buckets will be at the door. Music is by Abbeyfolk your support is greatly appreciated. Please come along to a great night out.

The club will hold its Christmas Draw and Party in Napper Tandy’s lounge on Sunday December 22nd. There’s €500 in Cash prizes on the night plus numerous other Spot prizes to be won. Music is Supplied by Carlow band ‘’Monroe’’ and Finger food will also be served and everyone is welcome.

Tickets at €2 or three for €5 are on sale from all Players, Management, Committee members and Napper Tandy’s. Finally the Club would like to wish all it’s members, players, sponsors and supporters a very safe and peaceful Christmas and prosperous New Year.

Gracefield Ath 0 Stradbally Town 3 This was a great three points on the road for Stradbally against second place Gracefield. Coming into the game on the back of a couple away defeats, the away side showed character to get things back on track.

Colin Beale had Stradbally ahead on five minutes with a fine low finish from 15 yards after Damien Murphy put him through.

This gave the away team the perfect start and both Paddy Robbins and Jake Byrne could have increased the lead before the break but 1-0 it remained at half-time.

Stradbally were looking solid at the back with Ger Byrne, Conor Brady and Daithi Mulhall repelling anything Gracefield threw at them. The next goal was vital and it came on 51 minutes when an effort from Pat Robbins deceived the Gracefield keeper and Damien Murphy finished from close range.

Colin Beale was lively all day and he could have added to his tally on 66 minutes after a fine pass from Jimmy Langton. Stradbally made sure of the points on 80 minutes when Kevin Tyson Holohan found the Gracefield top corner of the net from the edge of the area with a cross come shot.

A good entertaining game here with both teams sharing chances in the first half.

Michael Kennedy had Stradbally ahead on 10 minutes but Killavilla equalised on 39 minutes to leave it 1-1 at the break. Stradbally threw everything at the Roscrea men for the last 20 minutes and Justin Lalor struck the crossbar on 85 minutes. It finished even though with Stradbally having fine games from Tom Shiel, Justin Lalor and John Hayden.