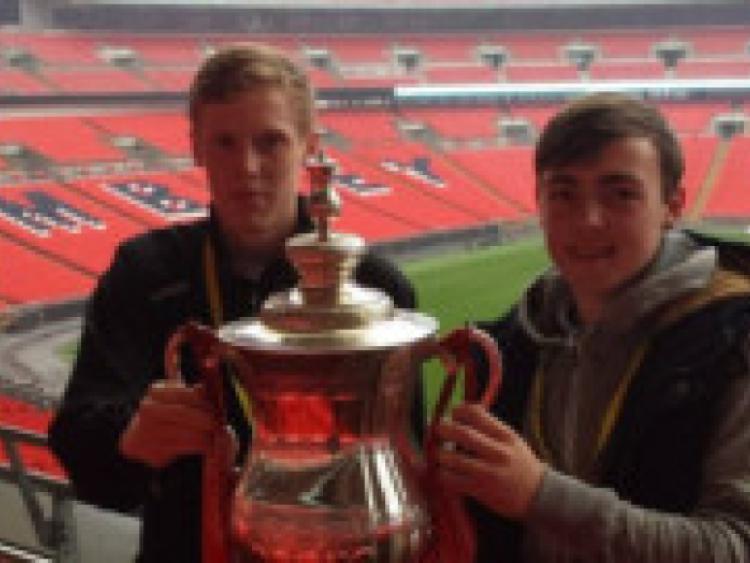 The Combined Counties Football League’s elite Youth squad capped a tremendous year for youths’ soccer in the Midlands by travelling to London to play against Brentford Academy’s crack youth squad.

The Combined Counties Football League’s elite Youth squad capped a tremendous year for youths’ soccer in the Midlands by travelling to London to play against Brentford Academy’s crack youth squad.

There were three players on the squad from Laois clubs, Cillian Callaly from Rosenallis, Oisin Fitzpatrick from Portlaoise and Justin Lalor from Stradbally Town.

This was the chance of a lifetime for the CCFL players to put themselves in the shop window by competing against a top English Soccer Academy. The facilities and the quality of coaching afforded to the CCFL Squad was second to none with Brentford’s U-17 Head Coach Anthony Hayes, who hails form Athlone, central to establishing the link with the CCFL.

The game itself started at a breakneck pace which is something the CCFL Youths had not come across before and within two minutes the Brentford Academy had hit the front.

However the quality of play from CCFL ensured that they were more than holding their own and they drew level when a great shot from an acute angle from Rosenallis star Cillian Callaly hit the back of the net following one of his trademark overlaps from the right full-back position.

Goals in quick succession from Brentford and Willow Park’s Nicky Kelly left the game evenly balanced heading to the half time whistle, however a glorious free kick from 25 yards by Willow Park’s Cathal Callinan sent the Youths in at half time 3-2 up.

Brentford Academy equalised shortly after half time when their big Lithuanian U-17 international centre-half out jumped the defence to leave Cain Bererton with no chance. Brentford Academy’s superior fitness and quality on the bench eventually began to show and four goals in quick concession put the result beyond doubt.

Again however the CCFL battled back into the game and Tullamore’s Gio Russo, who had been excellent all day, got his reward when he slid the ball beyond the advancing ‘keeper and although extremely tired, they continued to battle to the end.

Best for the CCFL on the day were Brian Moloney, Nicky Kelly, Gio Russo and Joe Moloney. Off the field, the professionalism of the Brentford Academy’s set up was an eye opener for both the Players and Coaching Staff of the CCFL’s Youths.

To cap off the trip the travelling party were present at Griffin Park when Brentford secured their promotion to the Championship next season following their 1-0 victory over Preston North End.

Trials have already commenced for next year’s Interleague Squad with over 70 players being assessed so far, out of this a squad of 20 will be entered in this year’s Macron Cup in Galway where the current squad finished second last season and then they will have to try and get beyond the quarter-finals of next seasons FAI interleague competition which was achieved this season.

REPORT: The Heath finish strong and move on to quarter finals