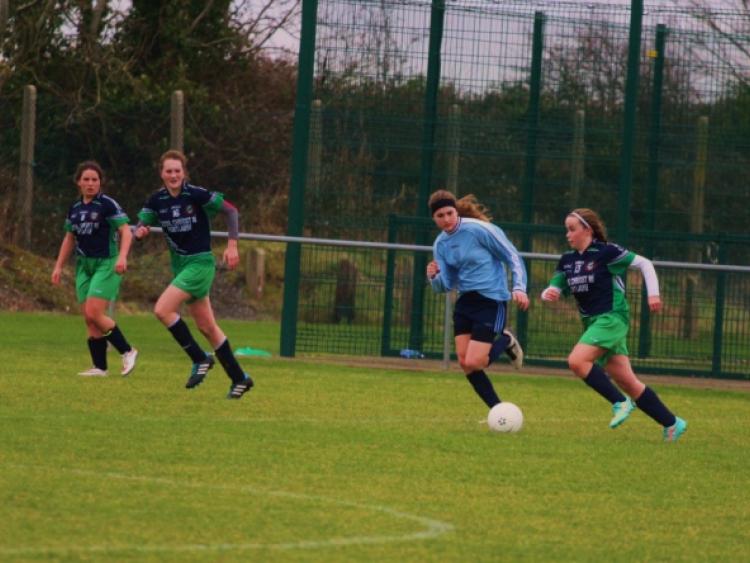 Despite the heroics of goalkeeper Natalia Cierpiscz who pulled off a string of fine saves throughout the game, Scoil Chríost Rí lost out to arch rivals Presentation, Kilkenny in the Leinster Final in Dublin last Tuesday.

Despite the heroics of goalkeeper Natalia Cierpiscz who pulled off a string of fine saves throughout the game, Scoil Chríost Rí lost out to arch rivals Presentation, Kilkenny in the Leinster Final in Dublin last Tuesday.

There was little to chose between the teams over the 70 minutes with Chríos Rí having the majority of territory and possession but Presentation always looked dangerous on the break.

Presentation got off to the perfect start as they opened the scoring inside the first two minutes, and the goal came on the counter-attack.

Chríost Rí mounted the first attack but when it was broken up by Hanna Scott, the ball was quickly moved forward to Ciara Phelan and she finished the move with a low, unstoppable shot past Natalia Cierpiscz.

Chríost Rí responded well, keeping possession and passing the ball around in midfield but with Presentation getting behind the ball in numbers, they found it difficult to break through. These sides have played many times before across the age grades and Presentation had their homework done with two players marking the dangerous Emma Lawlor which made it very difficult for her to use her pace and get into the game.

However on 12 minutes, Chríost Rí got back on level terms. Good work from full-back Aine O’Neill started the move and she released Colleen Rickard up the right wing. Rickard put in a dangerous cross and the ball broke to Emma Lawlor who drilled the ball home.

Midway through the half, Presentation had a chance to retake the lead on another break but Ciara Delaney was denied by Natalia Cierpiscz. It was one of a number of saves from the goalkeeper who was commanding in the air, brave on the ground and superb when stopping shots.

With 25 minutes on the clock, Colleen Rickard looked to be in behind the Presentation defence but she was just beaten to the ball by Shauna Valentine. Just before half-time, Zoe Keegan almost got Chríost Rí into the lead. She skipped around three challenges but shot was blocked.

Scoil Chríost Rí pushed on at the start of the second half with Caoimhe Lalor, Gillian Keenan and Zoe Keegan keeping possession well in the middle of the field. However when Presentation were dangerous with their limited time on the ball and created two early chances in the second-half but they were both stopped by Natalia Cierpiscz.

Chríost Rí were struggling to get in behind Presentation who were defending in depth and breaking with speed. Nineteen minutes into the second-half, the Kilkenny side moved back into the lead. Another fast break ended with a cross swept in by Ciara Delaney and the impressive Lauren Valentine found space and finished the ball past Cierpiscz.

Chríost Rí tried everything in the final 13 minutes to get back into the game including an extremely clever corner routine that almost ended in a goal. After causing utter confusion in the Presentation defence, the ball was swung in. It fell to Emma Lawlor but her shot was saved by Cliodhna Kenny. The rebound fell to Zoe Keegan but once again the Kilkenny goalkeeper was in position to block the shot.

Chríost Rí’s best chance came four minutes from time. For once in the game, Emma Lawlor got in behind the back four and was bearing down on goal. However just as she was about to shoot, Ally O’Keefe got back to get a toe on the ball and put it out for a corner. The resulting corner was swung in dangerously but the Kilkenny defence just managed to deal with the danger.

Chríost Rí threw everything forward in the closing minutes in search of an equaliser. Great pressure from Zoe Keegan won a free-kick in the corner for the Portlaoise side. The ball was played across but once again Presentation held out.

Scoil Chríost Rí pushed everything into attack in the closing minutes including centre-half Orla Carroll but Presentation held on to claim the Leinster title.