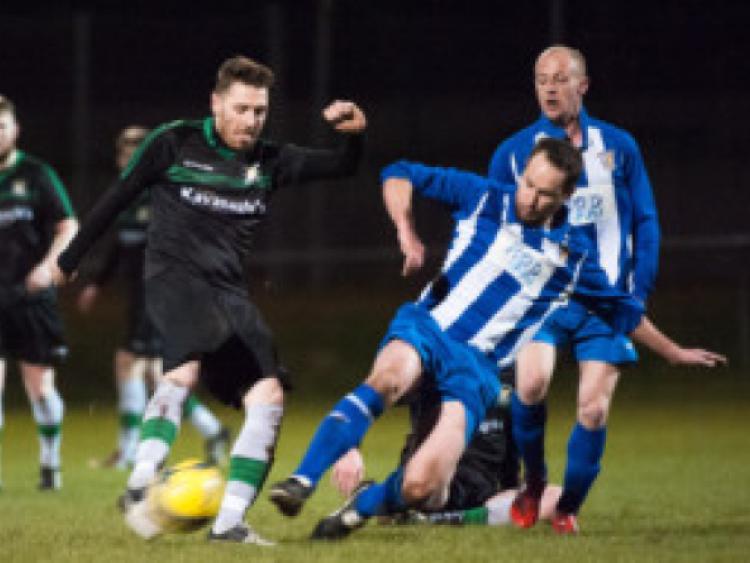 A superb hat-trick from the outstanding Paul Cahillane and a stunning finish from Darren Rogers were enough to see Portlaoise into the next round of the Polikoff Cup after a tough 90 minutes against a resilient Ratoath Harps on Friday evening.

A superb hat-trick from the outstanding Paul Cahillane and a stunning finish from Darren Rogers were enough to see Portlaoise into the next round of the Polikoff Cup after a tough 90 minutes against a resilient Ratoath Harps on Friday evening.

In bitterly cold conditions in Rossleighan Park, with intermittent flurries of snow blowing on the biting wind, Portlaoise twice came from a goal behind to seal their place in the quarter-finals.

The visitors packed the midfield from the off and dropped very deep when not in possession making it difficult for Portlaoise to create chances. Even after they were reduced to ten men just before half-time, Ratoath kept their defensive shape and proved a very difficult nut to crack.

Portlaoise almost made the perfect start to the game when a free from Paul Cahillane was flicked goalward by Gary O’Sullivan but Sam O’Connor in the Ratoath goal got across to make the save.

On their first attack forward after ten minutes, Ratoath almost opened the scoring when a corner from the right was met by a powerful header from Damien Deasy but, fortunately for Portlaoise, it hit the underside of the crossbar but didn’t cross the line.

Portlaoise came close again moments later at the other end when a pass from Gary O’Sullivan split the defence but Sam O’Connor was quickly off his line to deny Martin Staunton.

Any time Portlaoise had possession, all 11 Ratoath players dropped into their own half but when they won the ball back, they broke quickly. Just past the quarter hour mark, the visitors broke the deadlock against the run of play when a long throw from the left was flicked by Will Stafford and the ball looped over Mick Nolan into the corner of the net.

Paul Cahillane almost equalised after 25 minutes with a sweetly struck free-kick but once again O’Connor was alert in goal and got a strong hand to the ball to divert it around the post. The Ratoath ‘keeper was having an outstanding opening 45 minutes and he was on hand again soon after to deny Shane Brophy.

Portlaoise continued to press forward but they were stifled time and again by the massed ranks of the Ratoath defence. A jinking run by Paul Cahillane almost unlocked the defence but his shot was blocked.

Despite Portlaoise creating a few half chances, Ratoath looked set to hold their lead to the break but with three minutes to go to the interval, they were reduced to ten men when Stevie Creagh was shown a straight red card after a late challenge on Darren Rogers. In fairness to Creagh, he did look to be making a genuine attempt to block the ball but his feet were off the ground and the referee had no option but to dismiss the player.

Portlaoise immediately took advantage with Paul Cahillane scoring a fine individual goal. He made the run for a throw-in, instantly controlled the ball, went around three players before drilling the ball into the bottom corner of the net.

That should have put Portlaoise in position to push on in the second-half but five minutes after the restart, they were caught from another set piece when Damien Deasy rose highest to power home a header from an in-swinging corner.

Despite being down to ten men, Ratoath worked very hard to keep their shape and they continued to frustrate Portlaoise. Darren Rogers and Dylan McCabe had half chances but Sam O’Connor was not troubled in the Ratoath goal.

Portlaoise came very close to drawing level with two chances in quick succession in the 65th minute. A cracking volley from the edge of the box from Shane Brophy was tipped over by O’Connor and from the resulting corner, Neil Heffernan headed inches wide.

However the pressure was building from the home side and the equaliser eventually came with 20 minutes remaining. Good work down the right from Evan McEvoy and Dan Dunne created space for Shane Brophy. He whipped in a delightful cross and Paul Cahillane was on hand to blast home from the edge of the six yard box.

That goal visibly boosted Portlaoise and they pushed forward in search of a winner and it duly came five minutes from time. After a rare Ratoath attack was broken up, Portlaoise broke at pace with impressive substitute Dylan McCabe carrying the ball up the middle of the field. He played a perfectly timed and perfectly placed pass to Darren Rogers who struck a glorious first time shot from the edge of the box that gave O’Connor no chance as it flew into the top corner of the net.

Ratoath finally pressed forward in search of an equaliser but the game was put beyond them in the final minute.

Mick Nolan launched a clearance down field out of his hands and as the Ratoath defence dithered, Paul Cahillane nipped in front of Sam O’Connor getting a toe to the ball to divert the ball past the goalkeeper and into the back of the net.

It capped an impressive comeback win for Portlaoise who were forced to fight all the way by a Ratoath side who defended stoutly throughout however it was the individual brilliance of Paul Cahillane and his cultured left foot that won the day for Portlaoise.