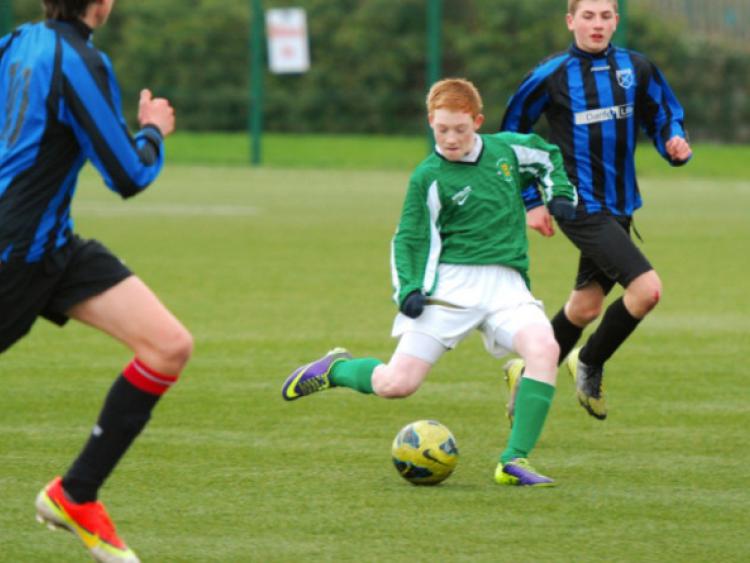 Portlaoise Town U-15s were in superb form on Saturday when they played Mid-Sutton from the North Dublin Schoolboys League in this National Lions Cup tie in the Leisure Centre in Portlaoise last Saturday afternoon.

Portlaoise Town U-15s were in superb form on Saturday when they played Mid-Sutton from the North Dublin Schoolboys League in this National Lions Cup tie in the Leisure Centre in Portlaoise last Saturday afternoon.

Portlaoise started this tie on the front foot and gained the upper hand in midfield where Ruairi Lewis and Niall Doran were excellent.

With just 10 minutes on the clock, a brilliant pass from Lewis sent Joe Nevin clear and he chipped the keeper open the scoring.

Five minutes later Aaron Wright beat three defenders but shot into the side-netting. The Mid-Sutton centre forward then broke clear on 20 minutes but Sean McCormack raced from his goals to clear the danger.

Soon after Aaron Wright was put through by a lovely chip from Fionn Scully and he slipped the ball under the advancing keeper to make it 2-0 to the Town. Jack Langton was then fouled in the box on 35 minutes and Niall Doran stepped up and blasted the ball low into the bottom corner to make it 3-0 and that’s how it stayed until the break. Mid-Sutton started the second half in good style and had two good chances in the first 10 minutes but good defending by Brian Sheehy, Jason Maher and Charlie O Brien kept them scoreless.

Portlaoise continued to pile on the pressure at the other end and went 4-0 up on 55 minutes when good link up by Charlie O Brien and Aaron Wright on the left saw Wright send over a perfect cross for Joe Nevin to head home.

Portlaoise made it five on the hour mark when after a five man moved started by Jason Maher in defence was finished low into the bottom corner by Aaron Wright.

The goals kept coming and Joe Nevin completed his hat-trick on 70 minutes when he finished in style after been set up by Fionn Scully and Jack Langton to make it 6-0.

Jack Langton completed the scoring on 78 minutes when good play by Ross Brennan and Ronan McEvoy on the right saw Fionn Scully send over a brilliant cross for Langton to blast home from 10 metres to complete the scoring and leave the final score 7-0. Portlaoise are now into the quarter-finals of the National Lions Cup and await the draw to see who they will play. Mid-Sutton performed well in this match but Portlaoise Town’s passing game saw them create more chances and their strikers took their chances well.

Best for the Town were Sean McCormack, Charlie O Brien, Jason Maher, Brian Sheehy, Aaron Wright, Aaron Feane, Jack Langton and man of the match Joe Nevin. Portlaoise Town’s next match is against Mountmellick Utd in the Second Leg of the MSL Cup next Saturday in Portlaoise with kick off at 10.45am.