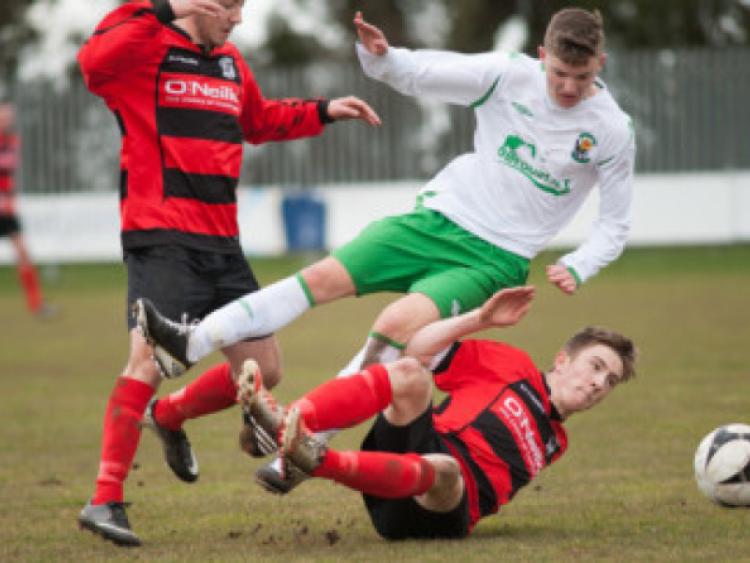 A goal 15 minutes from time for the North Dublin Schoolboys League settled this tie and broke CCFL hearts after an enthralling 90 minutes of football in Leah Victoria Park on Sunday.

A goal 15 minutes from time for the North Dublin Schoolboys League settled this tie and broke CCFL hearts after an enthralling 90 minutes of football in Leah Victoria Park on Sunday.

The Combined Counties Football League side had come back from the concession of an early goal when Cathal Callinan levelled the scores before the break. After that they were the better side and dominated in terms of territory and possession however they didn’t nab the all important second goal that would have put their noses in front.

They were punished when Shane Carter scored his second of the day to put the Dublin side in front and while the CCFL pushed for an equaliser right to the final whistle, they couldn’t find a way past Adam Kmet.

The CCFL side were bitterly disappointed at the final whistle having given their all from start to finish but it was the North Dublin side who advanced to the last four of the prestigious competition.

Having come through a tough group with wins over the Limerick and Clare Leagues, the CCFL advanced to the quarter-final stage with an excellent 3-1 win away to the Donegal League in January.

Confidence was high heading into Sunday’s game in Tullamore but they were slow to settle into the game as the NDSL controlled the early exchanges. They were rewarded after just 12 minutes when striker Shane Carter broke the offside trap latching onto a perfectly waited through ball and the young man showed great composure to lob the ball over Brandon McEvoy.

McEvoy was called into action twice in quick succession after the goal denying both Adam Murphy and Joe Fitzpatrick to keep his side just one adrift.

After the early onslaught from the visitors, the CCFL eventually came more into the game and by the midway point of the half they had taken control of proceedings. The equaliser duly arrived with 36 minutes on the clock when the Willow Park pair of Jamie Fahy and Cathal Callinan combined with Callinan applying the finish to get the CCFL back on level terms.

The NDSL side were a constant threat on the break and they nearly made the CCFL pay before half-time but once again Birr’s Brandon McEvoy was on hand to deny Shane Carter.

The pattern of play continued after the break with the CCFL dominating territory and possession however they struggled to create many clear cut opportunities.

They had a great chance to get in front on 71 minutes when ace marksman Gio Russo looked all set to score but he was denied by a last ditch challenge from Shane Darcy.

The CCFL continued to apply the pressure but the elusive second goal just would not come and with 15 minutes remaining they were punished on the break.

The pace of the Dublin side was a constant threat and they made it count when Carter broke through on the inside right channel and he drove an unstoppable shot past McEvoy to put the NDSL back into the lead.

The CCFL tried everything in the closing minutes to salvage a draw but they found Adam Knet in the Dublin goal in top form and they eventually ran out of time.