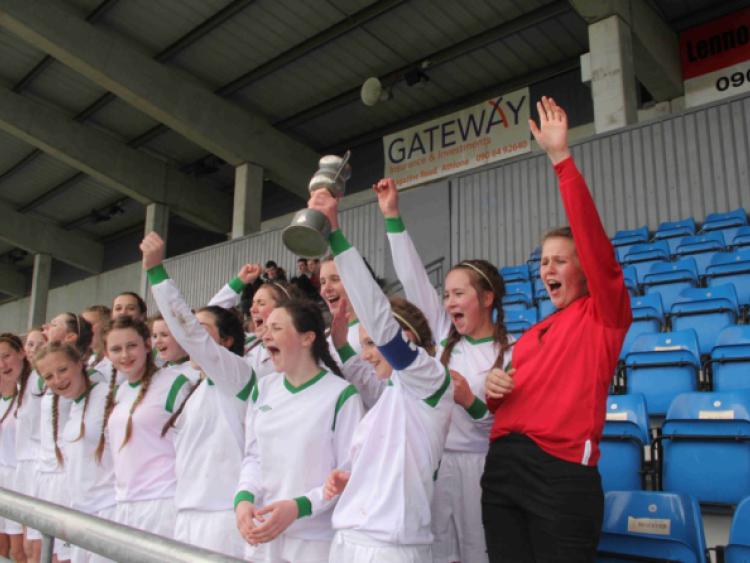 A five star performance from Emma Lawlor fired Scoil Chríost Rí to victory in the All Ireland Cup Final in Athlone last Wednesday.

A five star performance from Emma Lawlor fired Scoil Chríost Rí to victory in the All Ireland Cup Final in Athlone last Wednesday.

The team captain struck for five goals, including one audacious chip over the advancing ‘keeper, which proved to be the difference between the sides. While Lawlor was undoubtedly the Player of the Game, the entire Scoil Chríost Rí team performed superbly to claim an impressive win against a very talented Roscommon side.

Goalkeeper Aimee Keane was ever alert and was quickly off her line on a number of occasions to thwart numerous Convent of Mercy attacks. The back four were well organised and defended excellently as a unit.

Gillian Keenan and Elaine Daly formed a formidable partnership in centre-midfield while Erone Fitzpatrick and Emma Lawlor were a constant menace to the Roscommon side with their pace and direct running on the wings. Chloe Langford and Zoe Keegan were always a threat up front and their hold up and link up play were key in many of the goal scoring attacks.

Playing into the strong wind on the immaculate playing surface in Athlone Town’s home ground, Scoil Chríost Rí blasted out of the blocks and were 1-0 up with just two minutes gone. Good work from Emma Lawlor, Gillian Keenan and Chloe Langford opened up the space for Zoe Keegan and the centre-forward made no mistake with a precise finish.

Convent of Mercy hit back almost immediately when Lena Gacquin showed an incredible turn of pace to outstrip the Scoil Chríost Rí defence before slotting the ball past the advancing Aimee Keane.

With heavy rain showers sweeping across the ground throughout the game, parity only lasted until the eighth minute however as Scoil Chríost Rí jumoed back into the lead. A great run down the right wing by Erone Fitzpatrick ended with a whipped cross that Emma Lawlor finished with aplomb to the back of the net.

Midway through the first-half, the lead was extended to two. After a Convent of Mercy attack was well broken up, Scoil Chríost Rí broke quickly and a well placed pass from Gillian Keenan put Emma Lawlor through and the winger made no mistake finishing neatly after a surging run.

Scoil Chríost Rí looked dangerous every time they attacked up to half-time but the score remained at 3-1 to the break.

The first chance of the second-half fell to Convent of Mercy but after consecutive corners, a volley from the impressive Sarah Scally flew inches over the bar.

That narrow escape proved to be a wake up call for Scoil Chríost Rí who extended their lead to three ten minutes into the second-half. Again it was Gillian Keenan who supplied the through ball for Emma Lawlor who again made no mistake with a powerful low finish.

Keenan was pulling the strings in midfield and she almost found the net with a flick from an inswinging Chloe Langford corner but with ten minutes remaining, she got the goal her efforts deserved. She found herself in space at the edge of the box and unleashed an unstoppable drive that flew into the top corner of the net to put her side 5-1 ahead.

Convent of Mercy pulled one back four minutes from time when the lively Lena Gacquin put a rebound to the back of the net after Aimee Keane had initially done well to deny Emily McNulty Cleary.

That was as good as it got for the Roscommon side however as two more goals from Emma Lawlor rounded off a hugely impressive display. With a minute remaining, she found herself in behind the Convent of Mercy defence and showed great composure and maturity to slot her shot into the bottom left corner of the net past the stranded ‘keeper.

Her fifth and Scoil Chríost Rí’s seventh was a goal that would grace any final and was the icing on a very sweet cake for the Portlaoise side. With the goalkeeper coming off her line and the two centre-halves closing in, the young forward very calmly chipped the ball over the ‘keeper into the back of the net.

The final whistle went soon after sparking scenes of great celebration for the new All Ireland Champions.