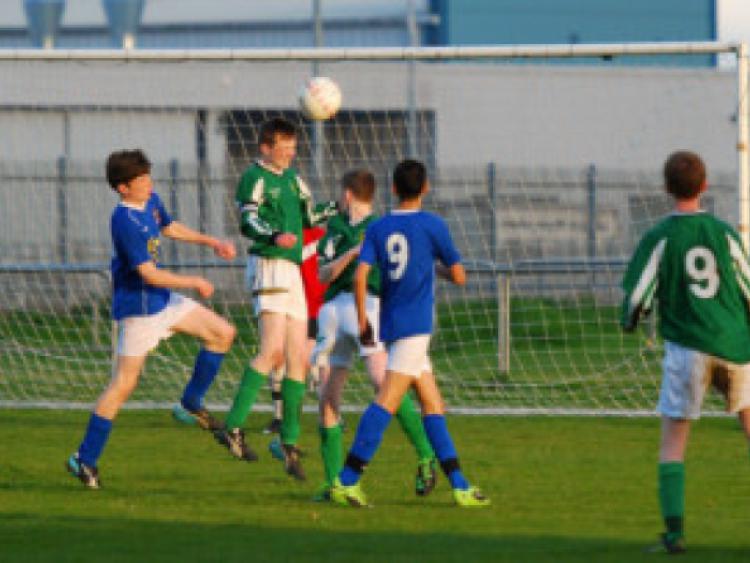 Portlaoise and Abbeyleix played in the final of the MSL U15s Cup Final in Rossleighan Park in what must have been one of the best matches ever played at the venue.

Portlaoise and Abbeyleix played in the final of the MSL U15s Cup Final in Rossleighan Park in what must have been one of the best matches ever played at the venue.

A large crowd turned up for this final which ended in the dreaded penalty shoot out and Abbeyleix were the unlucky ones to lose out.

Abbeyleix started the better and dominated the early midfield exchanges and went 1-0 ahead on 12 minutes when a mix up in the Portlaoise defence allowed Conor Madden in to score. Five minutes later they went 2-0 up when Dean Carey scored from a long range free kick.

Portlaoise then started to get a grip of the midfield sector and when they got a free kick on the edge of the box on 25 minutes, Aaron Wright scored with a brilliant shot into the top corner to make it 2-1 and this is how it finished at the break.

The second half was played out around midfield with very few clear cut chances created. Aaron Wright hit the post on 65 minutes with a brilliant strike from outside the box. Abbeyleix responded when their centre forward Charlie Whelan broke clean through on 70 minutes but Sean McCormack and Jason Maher combined to clear the danger.

Portlaoise levelled the tie on 75 minutes when good work on the right by Ronan McEvoy set Jack Langton up and he finished with a low shot into the corner to make it 2-2.Charlie O Brien and Brian Sheehy had two good efforts on goal but the Abbeyleix keeper Darren Brennan saved well on both occasions and it finished 2-2 at full-time.

The match then went into two periods of 10 minutes extra-time and Abbeyleix scored on 88 minutes when from a brilliant move down started by Colum Dunne saw the ball crossed into the box and finished in style by Thomas McCann to make it 3-2 and this is how it finished at the break.

Abbeyleix defended for their lives in the last period of extra time but just on the full time whistle Portlaoise won a corner and from this corner by Ruairi Lewis, a Brian Sheehy header was finished to the net by Craig Reddin to leave the score 3-3.From the kick-off the referee blew the final whistle and the game went to penalties.

Charlie O Brien, Ruairi Lewis, Fionn Scully and Aaron Wright scored for the Town and Sean McCormack made two brilliant saves to deny two of the Abbeyleix penalty takers and it finished 4-2 to Portlaoise and the double was completed as Portlaoise had won the MSL U15s Major Division League title on Thursday night by beating Tullamore 2-1 in the league decider.

It would be unfair to pick out any player from either side as everyone played their part in this match and it was heartbreaking for Abbeyleix as the were 30 seconds away from victory.

The management team of the Portlaoise U15s would like to thank the players and parents for their commitment and support all season and also thank Portlaoise A.F.C and the MSL for their help as well.

Portlaoise travelled to Tullamore last Thursday evening to play the home team in this league decider. Tullamore needed three points to win the league but a draw would do Portlaoise.

After early Tullamore pressure, Portlaoise took the lead on 13 minutes when Joe Nevin headed home a corner from Aaron Wright. Both sides had chances but it remained 1-0 to the break.

Portlaoise started the second half in good form but the Tullamore keeper saved twice on both occasions to deny both Ger Ryan and Jack Langton.

Portlaoise went 2-0 ahead on 60 minutes when, from a Sean McCormack long clearance, Ger Ryan controlled the ball and put Joe Nevin clean through and he chipped the keeper.Tullamore then scored on 65 minutes to leave the score 2-1.

Then in the space of five minutes Tullamore had two great chance to level the game but Sean McCormack pulled off two magnificent saves to deny the Tullamore striker when he was clean through and only the keeper to beat on each occasion.