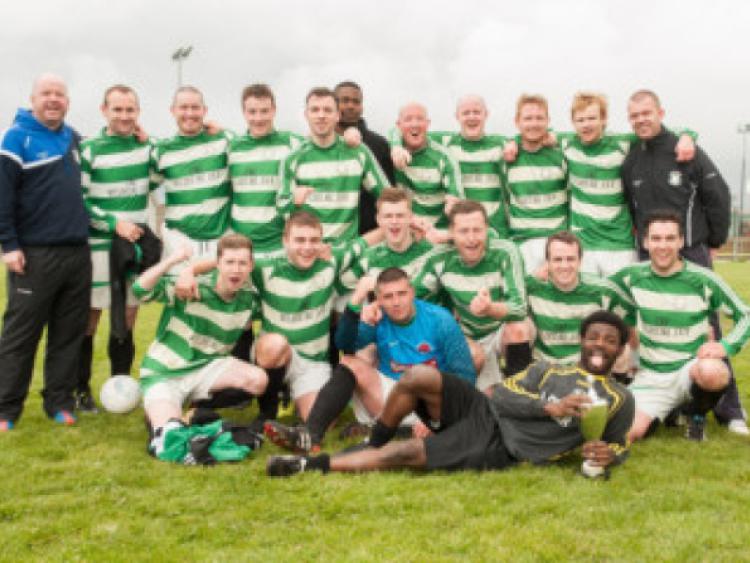 A goal seven minutes from time from Sean McFadden eventually settled this entertaining cup final in Mountmellick in favour of Portlaoise on Sunday afternoon.

A goal seven minutes from time from Sean McFadden eventually settled this entertaining cup final in Mountmellick in favour of Portlaoise on Sunday afternoon.

Played in a strong wind and intermittent, squally showers, Portlaoise dominated the opening 45 minutes and were 1-0 ahead at the break having played with the elements in their favour. They should have been ahead but they spurned a number of opportunities.

In an typical game of two halves, Walsh Island Shamrocks were on top in the second-half, dominating in terms of territory and possession, and a goal ten minutes after the break got them right back in the game. However they couldn’t get their noses in front and they were caught late when Portlaoise got their winner on a rare attack.

Shamrocks threw everything forward in search of a late equaliser but Portlaoise held on well in the closing minutes to claim the Denis Delaney Cup.

Both of these sides had relatively disappointing league campaigns and came into the game hoping to get something from their long seasons. Portlaoise won the toss and chose to play with the strong wind blowing straight down the field in Conor Davis Park.

They were quickly onto the front foot and created a number of half chances in the first ten minutes without threatening Barry Duffy’s goal. A number of long balls forward travelled too far on the wind and rolled harmlessly over the Shamrocks’ end line.

With ten minutes on the clock, Portlaoise created an excellent opportunity when Paul Sutton put Sean McFadden through but the midfielder’s shot was well saved by Barry Duffy. Portlaoise continued to pile on the pressure and came close again after 24 minutes when a shot from Thomas Kane was tipped over by Barry Duffy who was having an outstanding half in the Shamrocks’ goal. Kane again close again soon after when he got on the end of a cross from Nathan Carpenter but his header just cleared the crossbar.

Ten minutes before the break, Portlaoise eventually broke the deadlock from the penalty spot. It came on the break after Shamrocks came close to taking the lead. A dangerous ball into the Portlaloise box was clawed away by Moses and they broke quickly down the right wing. Shane Collins played an inch perfect ball through to Paul Sutton who was taken down by Ian Duffy. Thomas Kane stepped up to take the kick and made no mistake low to Barry Duffy’s right.

It remained 1-0 to the break but after the restart, with the wind behind them, Shamrocks gradually took control of the game. After Shane Collins had gone close for Portlaoise early in the half, Shamrocks’ John Doyle hit a powerful shot that was well saved by Moses in the Portlaoise goal. The goalkeeper had to be on his toes again minutes later when a dangerous ball in deflected off Kevin Sheehan but the ‘keeper did well to get something on the ball and keep his side in front.

Ten minutes into the half, Shamrocks were level. A long throw was flicked on by Thomas Connor but Moses got his hand to the ball. However John Doyle was first to react and he guided the ball to the back of the net. The goalkeeper was injured during the scramble and while he stayed on initially, he eventually limped off.

Portlaoise should have retaken the lead after 61 minutes but Kane headed over with the goal at his mercy. Soon after the centre-forward took over in goal for the injured Moses although he saw little action as his defence restricted Shamrocks to speculative long range shots.

With seven minutes to go, Portlaoise got back in front when a corner from Shane Collins was headed home at the near post by Sean McFadden who emerged from the crowded penalty area celebrating the goal.

Stand in ‘keeper Kane was called into action once in the Portlaoise goal when he did well to palm away a dangerous in-swinging corner. Portlaoise held possession well in the closing minutes keeping the ball in the Shamrocks end of the field.

Man of the match Paul Sutton played an integral role throughout the game and he held possession well near the end. Playing a more advanced role in the first-half, he dropped into centre-midfield after the break and was equally effective in the engine room. Kevin Sheehan and Barry Lawless were also very impressive at the back.

Barry Duffy was outstanding in the first-half in the Shamrocks goal keeping his side in the game while Emmett McKenna and Ian Duffy put in an admirable shift in midfield.