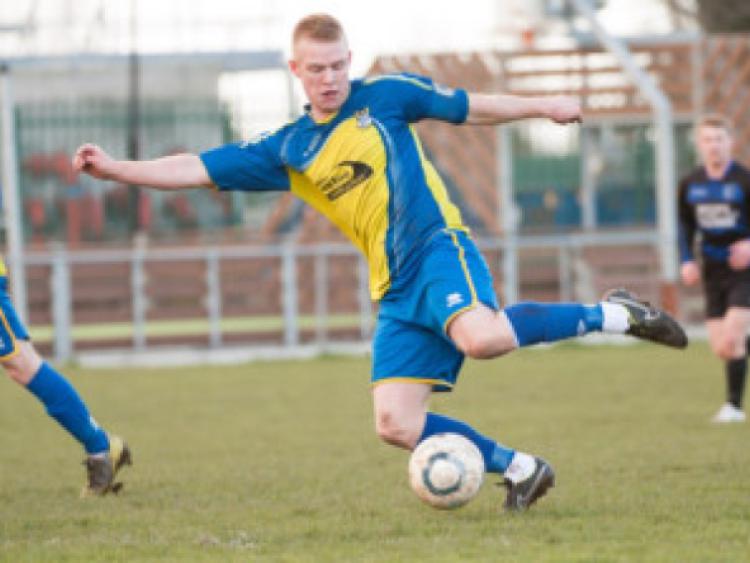 A goal in either half by Mountmellick’s Mark Goodwin sees his side move to within one point of Division 4A leaders Portlaoise with four games in hand.

A goal in either half by Mountmellick’s Mark Goodwin sees his side move to within one point of Division 4A leaders Portlaoise with four games in hand.

Portlaoise created more chances than their opponents in the opening thirty minutes. Robbie Ging chipped the wall beautifully from a free kick in the sixth minute but Mountmellick ‘keeper Johnny Goodwin saved it.

Ola Gayna made a good run through the middle, using his speed to split the Mountmellick defence, but his finish was poor and it went to the right of the post and wide.

Despite playing into a blinding sun in the opening half, Mountmellick responded well to these early Portlaoise threats. Mark Grennan showed off his skills and set Gary Dowling up with a great chance 20 yards out which he sent across the mouth of the goal and just wide.

Oliver Renka had a great chance for Portlaoise in the 16th minute. An accurate cross by Robbie Ging fell nicely to Renka but he sent the ball just wide of the post, much to the relief of Mountmellick ‘keeper Johnny Goodwin.

Mountmellick defended well with Stuart O’ Sullivan making some superb tackles to keep Portlaoise’s attacks to a minimum and his hard work paid off up front. Mark Grennan had a close range shot in the 39th minute which hit the side netting and went wide.

Mountmellick’s first goal came shortly after this from a Grennan throw in. It hit off the head of Mark Parkinson and on to the foot of Mark Goodwin who finished well leaving the half time score 1-0 in favour of the home side.

Portlaoise started the second half strongly and were unlucky to have a goal disallowed for offside in the 60th minute. Ola Gayna sent a great ball into Robbie Ging who hit the ball into the top right corner but the effort was ruled out.

Gary Dowling had a good chance for Mountmellick just after this but his shot in front of goal was cleared by the Portlaoise backs.

Mountmellick continued to press on from a Gary Dowling took free kick, Mark Goodwin got a foot to it and it deflected off a Portlaoise defender and into the back of the net to leave the home side 2-0 ahead.

Portlaoise sub Joe Nevin had a chance in the 88th minute but Johnny Goodwin made a good save to deny him. Portlaoise got a corner with the last kick of the game. Ola Gayna sent it high into the box and Eoin Carroll tipped it past Goodwin and into the net to make it 2-1 as the referee called time to the game leaving the visitors no chance to snatch an equaliser.