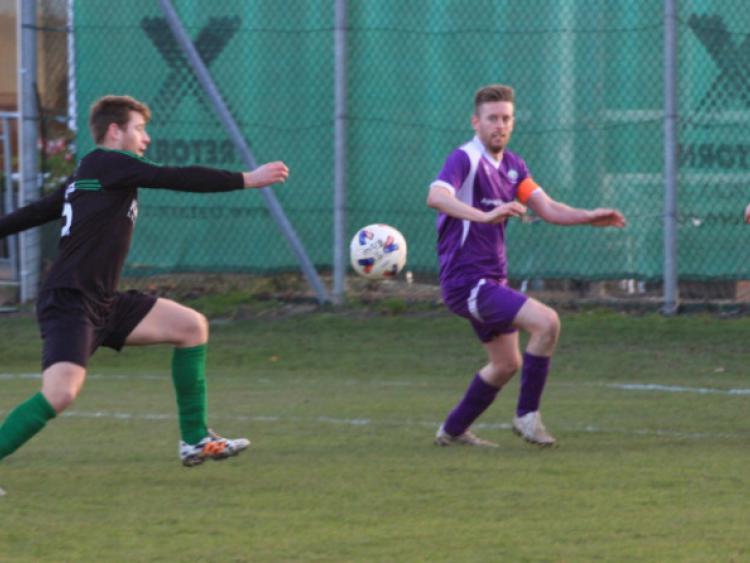 Portlaoise secured a fine 4-2 win on Sunday away to CYM Terenure to remain second in the LSL Major Division after 11 games.

Portlaoise secured a fine 4-2 win on Sunday away to CYM Terenure to remain second in the LSL Major Division after 11 games.

This was a tough game against an improving Terenure side and they need two late goals to secure the three points.

Portlaoise started brightly and almost went ahead in the first minute when Shane Brophy picked up a stray pass from Carl O’Gorman but his shot went just wide. Five minutes later, a great pass from Paul Cahillane found Darren Rogers but his left footed shot was too close to home keeper Daniel Smyth.

Moments later, a great overlapping run and cut back from Martin Staunton was fired just wide by Colm Poole. Portlaoise continued to dominate on chances and both Staunton and Brian Bowe just missed Cahillane’s free kick with an open goal.

Against the run of play CYM Terenure went ahead. After Bowe mis-kicked, Brian Duke ran through and slotted well past Joe Walshe on 22 minutes. Portlaoise had further chances for Rogers and Cahillane but Smyth saved well on three occasions. Terenure almost went two up but Joseph Kennedy’s shot was well save by Walshe low to his right.

Portlaoise finally got level on 35 minutes when Cahillane was bundled over in the area and Rogers dispatched the penalty.

They went two ahead just before the break when James Mullaney won back possession and played to Rogers. He played a superb pass into Brophy and his outstanding first time strike into the top corner gave Smyth no chance.

Brophy could have made it 3-1 when Poole played him in but his shot was well save ten minutes into the second half. Brophy picked up a knock and was replaced by Chris Mulhall and he was involved straight away in a great move with Cahillane and found Poole but his strike was inches wide.

However slack marking by Portlaoise let in Dara Monks to finish and leave the game level with half an hour to play. Mullaney then set Cahillane up but his shot was superbly pushed away by the impressive Smyth. Portlaoise continued to probe and the game looked in the balance as CYM were trying to catch Portlaoise on the break but the visitors regained the lead on 79 minutes.

Good passing from the back found Cahillane and his pass set up Mullhall who took on the home defence and fired a beautiful strike to the top corner for an outstanding goal. Moments later it was 4-2 when Mullaney won the ball and played into Dylan McCabe who set Cahillane up and he rounded the keeper before finishing calmly.

CYM had two late chances, the first was well cleared by Neil Heffernan and the Walshe saved from Sean Kearney.

Manager Greg O’Dowd was very happy after the game saying, ‘this is a tough place to come to and pick up points but the lads dug deep today and worked very hard and their class showed through in the end. They never panicked and kept doing the right things right til the end.”

Portlaoise now face local rivals Tullamore Town away on Friday at 7.45 in what promises to be one of the games of the season.