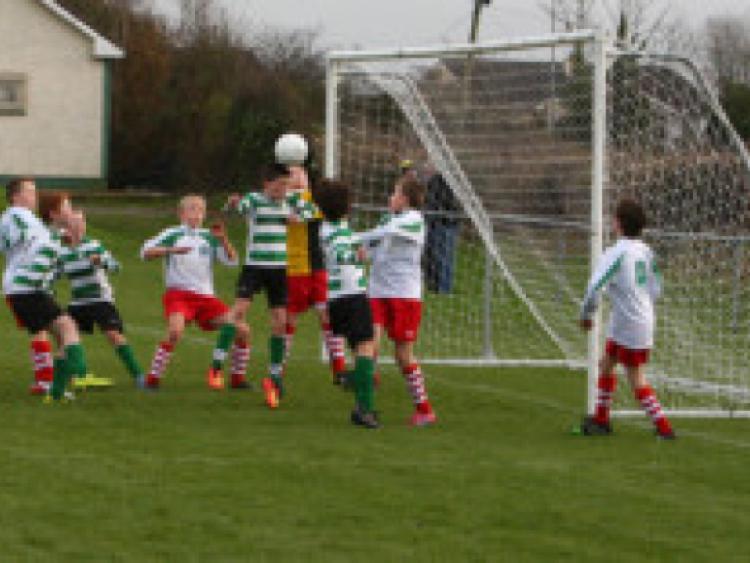 Portlaoise welcomed Burrin Celtic from Ballon in Carlow to very cold but dry Rosleighan on Saturday last in the quarter final first leg of the Midlands Regional Cup.

Portlaoise welcomed Burrin Celtic from Ballon in Carlow to very cold but dry Rosleighan on Saturday last in the quarter final first leg of the Midlands Regional Cup.

Portlaoise opened their account after ten minutes when Colin Conroy, Aaron Doran and Brian Smith combined for Jason Horan to drill an angled shot low inside the left post. Burrin almost equalised when Conall Rowney slipped while dealing with a through ball on the left wing, the Burrin winger was quickly closed down by the vigilant Josh Hogan before he could get his strike away.

Portlaoise won three corners in quick succession. Excellent deliveries resulted in efforts on goal by Colin Conroy, Jason Horan and James Reddin but all without profit.

Jamie Preston then cut out another Burrin attack and found Tiernan Cahill who drew a foul on the right wing. Aaron Doran floated the resultant free into the centre where Colin Conroy headed beautifully into the top left corner. 3-0. Then the Burrin striker got onto the end of a neat through ball between the Portlaoise centre-half and full-back and placed his shot low and firm for the back post only to repelled by Conor Graham who pulled off a great save.

Portlaoise made it 4-0 just before half time when sustained pressure from Michael Culleton and James Reddin resulted in Brian Smith finishing from close range.

Straight from the tip off Colin Conroy beat a defender then passed to Harry Whalley who in turn found Jason Horan who had his well placed shot tipped round the post by the Burrin keeper.

Half time substitutes Samuel Emmanuel, Kyle Enright and Harry Whalley were tormenting the Burrin defense with their wonderful combination play. Colin Conroy smashed a 25 metre, first time shot into the top left corner from a rushed clearance to make it 5-0.

Ten minutes later, a Ross Doyle cross was mercilessly finished to the net by the skilful Samuel Emmanuel. Callum McHugh, who went between the sticks for the second half, ensured that there was to be no joy for the brave Ballon boys by keeping a clean sheet.