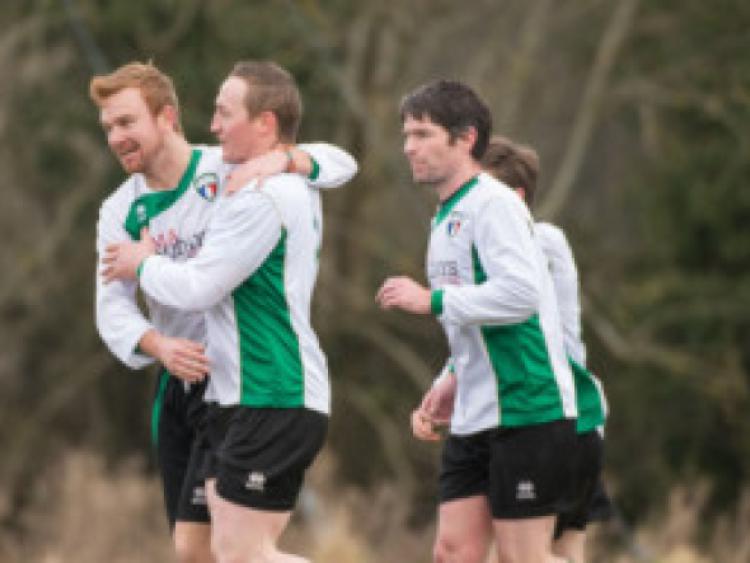 The final destination of the title in Division 3A will not be known until after the final ball of the season is kicked after the top two sides played out a thrilling 3-3 draw in Colaiste Iosagain on Sunday morning.

The final destination of the title in Division 3A will not be known until after the final ball of the season is kicked after the top two sides played out a thrilling 3-3 draw in Colaiste Iosagain on Sunday morning.

Portlaoise Shamrocks looked set to take all three points and move to the top of the table when they held a 3-1 lead with a man advantage after 55 minutes but Portarlington Town kept plugging away and after Steven Lyons had drawn them level, Peter O’Leary fired home a spectacular free kick from wide on the left to snatch a share of the points.

The result leaves Portarlington Town still two points ahead with one game to play. However Portlaoise Shamrocks still control their own fate as they have a game in hand and if they win out, they will claim the title.

On a blustery, cold morning, the standard of the football was excellent with both sides playing at a frantic pace from the off. The flow of the game was certainly helped by the refereeing of Ultan Beaumont who played advantage whenever the opportunity arose.

The opening goal after 14 minutes for Portlaoise Shamrocks came after the referee played advantage. As played continued, it was worked down the right side to Brian Farrell who whipped a dangerous ball across the box. It eventually broke to Ronan Molloy who showed great composure to put the ball past Padraig Bannon.

Advantage was a key factor in the equaliser that came just three minutes later. Once again the referee allowed play to continue down the right after a foul. Brian Cleary and Chris Booth combined before the ball was crossed to Peter O’Leary who drilled the ball home from close range.

The visitors almost retook the lead soon after but Kevin Fitzpatrick was dispossessed by Steven Lyons as he was about to shoot from close range. At the other end Stephen Terry came close but he was denied by a good save from Chris Lynch.

Ten minutes before the break, the home side were reduced to ten men when Chris Booth reacted after being up ended off the ball leaving the referee no option but to show him the red card.

Just before the break, the ten men came within inches of taking the lead. A looping header out of the Shamrocks area was met with a super volley on the run by Steven Lyons but Shamrocks goalkeeper Chris Lynch got his fingertips to the ball to guide it around the post.

Three minutes after the restart, Shamrocks took the lead from the penalty spot after Brian Cleary was adjudged to have handled the ball. Ronan Molloy stepped up sending Padraig Bannon the wrong way and guiding the ball into the bottom left corner of the net.

Ten minutes into the second-half, Shamrocks looked to have built a match winning lead when Kevin Fitzpatrick rose highest in the box to head home a free kick from Brian Farrell’s free kick from close range.

The home side were managing to attack on the break but they were not getting any clear sights of Chris Lynch’s goal. However just after the hour mark, they gave themselves a chance of getting something out of the game.

A long punt from Padraig Bannon was allowed to bounce by the Shamrocks defence and the always lively Steven Lyons got in around the back of the defence to head the bouncing ball over Chris Lynch.

Now playing with three at the back, Portarlington Town pushed on in search of an equaliser leaving some space for Portlaoise Shamrocks at the other end. Brian Farrell went close before an effort from Enda Kelly was saved right on the line by Padraig Bannon.

At the other end, Alan Glass went close from a free before Peter O’Leary stepped up to score a spectacular equaliser 12 minutes from time. A free-kick was awarded on the left wing. With the wall set up just on the edge of the box, O’Leary used the diagonal wind behind him to curl a powerful free-kick right into the top corner of Chris Lynch’s net.

With the game now level, both sides went in search of an equaliser with the last chance falling to Ronan Molloy but his free-kick from just outside the box curled inches over the bar.

In the end, a draw was the fairest result with both sides going into their final games still with the chance of winning the title.