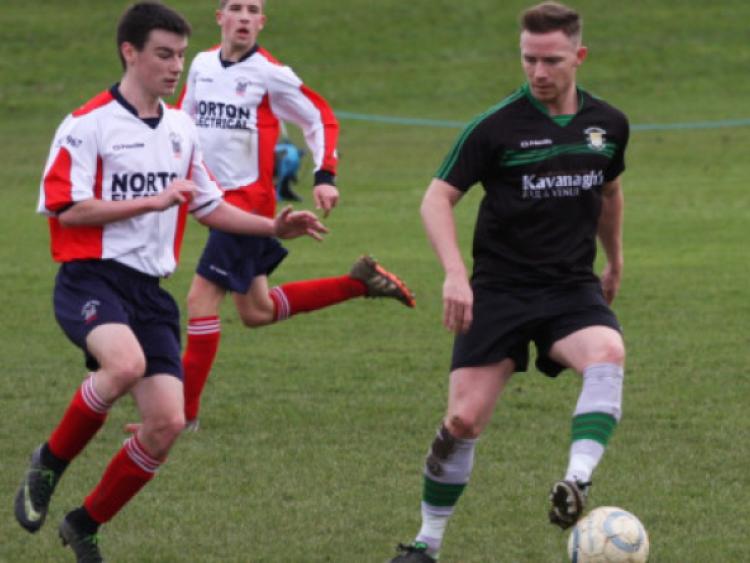 Portlaoise AFC came from two goals down with 12 minutes to go to beat Leicester Celtic and extend their lead at the top of LSL Major Division on Sunday.

Portlaoise AFC came from two goals down with 12 minutes to go to beat Leicester Celtic and extend their lead at the top of LSL Major Division on Sunday.

Two Paul Cahillane goals and a last minute winner from Dylan McCabe finally saw off the home side who proved a tough nut to crack.

Portlaoise dominated the game but chances were at a premium but McCabe tested home keeper Mark Lew after good play with Cahillane. Soon after McCabe was inches wide after an excellent team move involving Gary O’Sullivan, Dan Dunne and Neil Heffernan.

Portlaoise had another good chance when Heffernan just failed to connect with a Shane Collins cross after excellent play from Shane Collins. Heffernan failed to trouble Lew with a header after more good play between Collins and Poole. The visitors thought they had gone ahead when a Cahillane free kick found its way to McCabe who shot past Lew and Rory Fortune cleared but even though the ball was at least a yard over the line, the referee waved play on.

Leicester Celtic however took the lead moments later when a long clearance found the impressive Graham Buckley who ran through and clipped the ball over the advancing Mick Nolan with 40 minutes on the clock..

Portlaoise created the first good chance of the second half when Heffernan set up McCabe but his low drive was well saved by Lew. However soon after it was 2-0 to the home side. Buckley found space in bizarre circumstances and though his initial effort was saved by Nolan, he tucked away the rebound.

Portlaoise then threw everything at Leicester, but had to wait until the 78th minute to get one back. Good play from Evan McEvoy and Heffernan set up Cahillane on the edge of the area and his turn and strike left Lew with no chance. Manager Greg O’Dowd sent on Oisin Fitzpatrick for his debut and the teenager was impressive as Portlaoise went for the winner.

The outstanding James Mullaney was pushed into midfield and set up Cahillane with a superb pass. Cahillane controlled supremely and finished under the keeper for what looked like a deserved point.

However the visitors push for all three and led by Jonathan Savage they created a couple of late chances, before Leicester had a great chance to win the game. A great run and cross from Sean Keller found Alan Shaughnessy but his header brought the best out of Mick Nolan who went full stretch to save superbly.

Collins picked up the ball and played a pass to Aaron Rafter to flick onto McCabe and the striker showed great composure to round the advancing Lew and slide home in the 89th minute to complete an incredible comeback for the visitors.

On a weekend when the next six teams in the division played cup games this was an outstanding victory for Portlaoise over a very good Leicester Celtic side who had a 100% home record before this game.

Portlaoise are on their travels again next week when they play the much improved Knocklyon United at 2pm on Sunday.