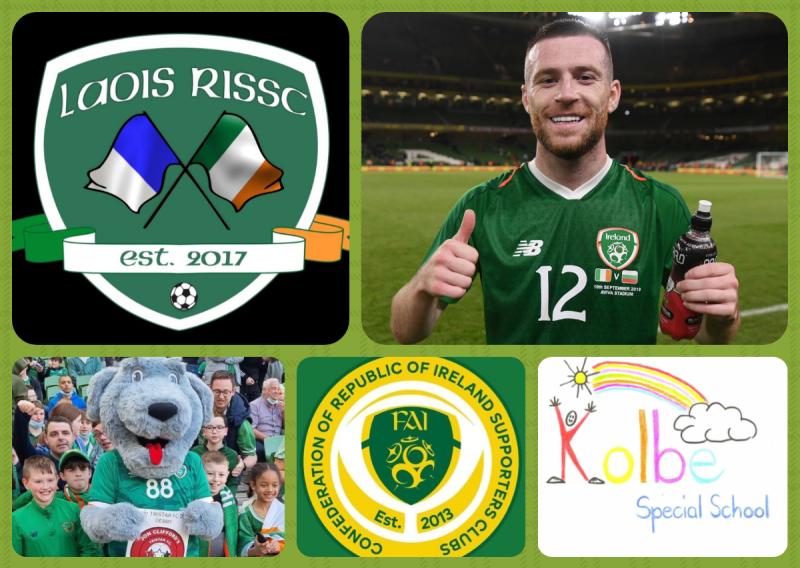 Fans of the Irish soccer teams from all over the country and beyond are set to descend on Laois for the Confederation of Republic of Ireland Supporters Clubs Cup in Portaoise.

The CRISC cup is coming to Portlaoise Leisure Centre this coming on April 30. The CRISC is the Governing body of nearly 30 Irish Soccer Supporters Clubs on the Island of Ireland.

The CRISC Cup which was launched in 2019 is an 8-a-side football tournament bringing Supporters Clubs teams from all around the country to battle it out in a Blitz type format to become CRISC cup Champions.

Tullamore Town were the hosts in 2019 while Mervue Utd in Galway City hosted in 2020 just before Covid hit which ruled out a tournament being played in 2021.

But now it’s back and this year Laois Republic of Ireland Supporters Club have the honour of hosting it in Portlaoise Leisure this coming Saturday April 30th which gets underway from 12pm with the final pencilled in for 3.30pm.

As in the two previous competitions a local charity is picked to be the beneficiary of funds raised on the day and night and this year Laois RISSC has chosen the Kolbe Special School in Portlaoise as its chosen beneficiary.

There will be a special guest on the day called Macúl who was recently relaunched by the CRISC committee as the official Mascot of the FAI making appearances pitch side at the recent Ireland Matches in the Aviva and he will be available to meet kids of all ages and have photos taken at the leisure centre from 12.30pm and all kids and their parents are welcome along to meet him.

Later that evening a special fundraising social night with be held in DeBruns at Humes in Portlaoise. MC on the night will be well known Midlands Radio and Newstalk sports reporter Will O’Callaghan and the special guests attending will be FAI President Gerry McAnaney and current Shamrock Rovers Star player and Ireland international Jack Byrne who will be doing a Q&A.

There will also be a draw on the night with some great prizes on offer with all funds raised as previously stated going to Kolbe School. To top the night off, Catalpa one of Irelands finest ballad bands will provide the Music on the night.

All soccer supporters of all ages are welcome to attend and watch the action on Saturday with the first game kicking off at 1pm while any donations and anyone wishing to buy draw tickets later that evening in Humes will be greatly appreciated for this terrific local school.