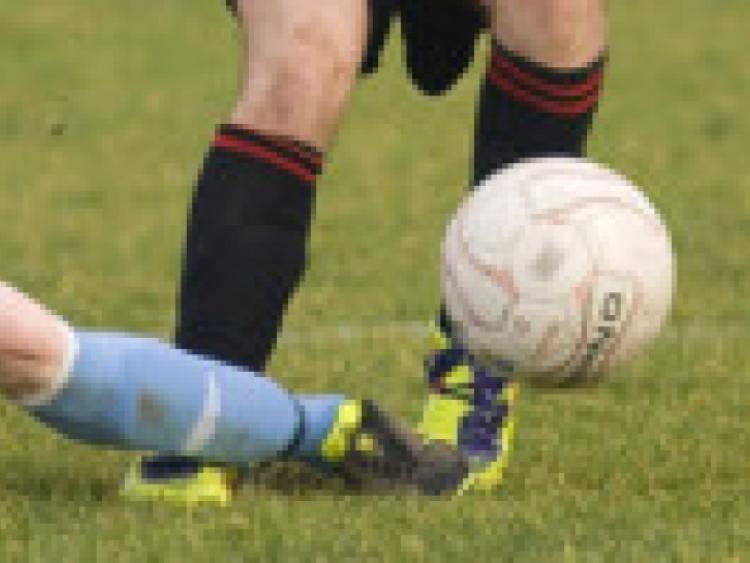 On a miserable Sunday morning, Stradbally made the trip to Athlone IT to face Clonbonny FC on the college’s FIFA Standard Astro Pitch and came away with a crucial win that catapults them up to joint third in the table.

On a miserable Sunday morning, Stradbally made the trip to Athlone IT to face Clonbonny FC on the college’s FIFA Standard Astro Pitch and came away with a crucial win that catapults them up to joint third in the table.

It looked as if they were going to have to settle for a draw but a late strike from substitute Jake Byrne, with almost his first touch, earned them a crucial three points.

With a game in hand on second placed side Gracefield Utd, Stradbally’s third win in a row has gotten them right in the middle of the fight for a promotion place.

This was one of just two CCFL fixtures that survived the weather on Sunday due to the poor weather and while the conditions didn’t affect the playing surface, the elements made it difficult for either side to playing free-flowing football.

Clonbonny started the game better with more possession without creating too much although one speculative volley from Kenneth Prendergast did cause concern for Robbie Moore before going wide of the post.

Stradbally carved out a couple of presentable chances with Derek Gorman bringing a fine stop from the home keeper on 29 minutes and then Pat Robbins saw his curling shot just go the wrong side of the post before half-time.

The wind eased somewhat in the second half allowing both teams to play more football. Jody Dillion was pushed into the top half of the field where he started to bring Damien Murphy and Kevin Holohan into the game.

The Stradbally defence got a fright on 64 minutes when they failed to clear a corner but the Clonbonny striker headed over from six yards. Stradbally made changes and pushed on for the win but it seemed they would have to be happy with a point.

Then on 88 minutes they carved out a winner. Colin Beale found Jody Dillon who broke down the right and cut in across the end line. He squared the ball for substitute Jake Byrne, who had just came on, to fire home the winner and bring all three points back home to Laois.

This was a battling display from the Stradbally men who stayed going until the end and who were well served by Dan Dunne in defence, Paddy Bergin in midfield and Jody Dillon up front.