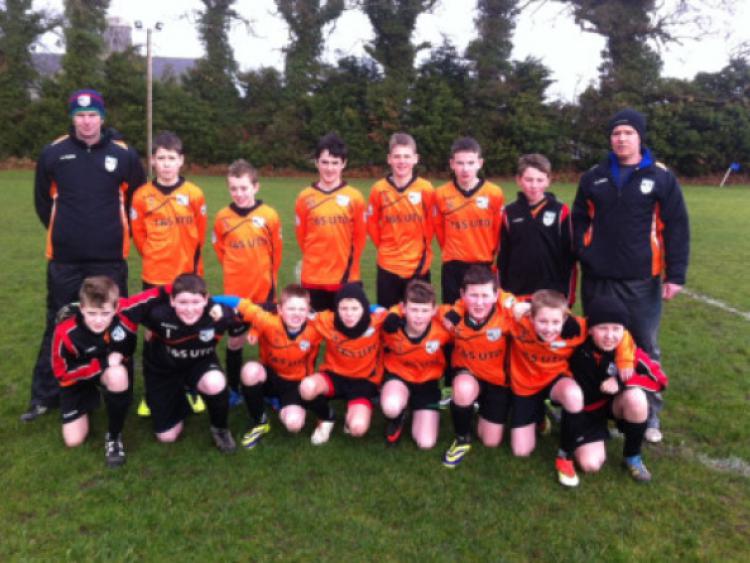 With both teams undefeated this season and occupying first and second place in Division 1, this was always going to be a keenly contested game.

With both teams undefeated this season and occupying first and second place in Division 1, this was always going to be a keenly contested game.

Both sides were missing playres both those who replaced them were not out of place. The home side, aided by a strong wind, set the early pace with Chris Moran going close after eight minutes with a shot from 18 yards out following a poor clearance.

Clonaslee’s first chance fell to Peter Dunne who saw his shot pushed away by William Oxley. The ball fell to Aaron Dunne who put the ball in the net but it was ruled out as he was in an offside postion.

T&S went ahead on 13 minutes and it was Chris Moran who finished from 10 yards out from a Micheal Conlon right wing cross.

From the kick off, Clonaslee won a corner and from it Josh Flynn shot was cleared off the line. With the weather getting considrably worse, players were finding it hard to stay on their feet but and on a break from a Clonaslee corner created a two on one situation and only great defending by Cian Barrett denied Michael Conlon and Darren Robinson a great chance to increase the home side’s lead .

The second half saw Clonaslees’ DJ Callaghan create a chance and almost equalise in the opening minutes however it was Chris Moran who made it 2-0 on 44 minutes with a shot from the left hand side of the penalty area which went through a group of players.

Clonaslee showed great determination despite going two behind and hit back when Aaron Dunne finished from close in on 48 minutes from a Bob Downey cross to set up a great finish to the game.

Darren Robison, with 29 goals so far this season, saw a great run into the Clonaslee penalty area stopped by a well timed Dylan Flynn tackle and at the other end Darren Conroy was stopped by Mark O’Connor as time ran out.

The second leg in Clonaslee promises to be as close a game but it was great credit to all the players who showed such heart and determination and provided such a good game on an awful day.