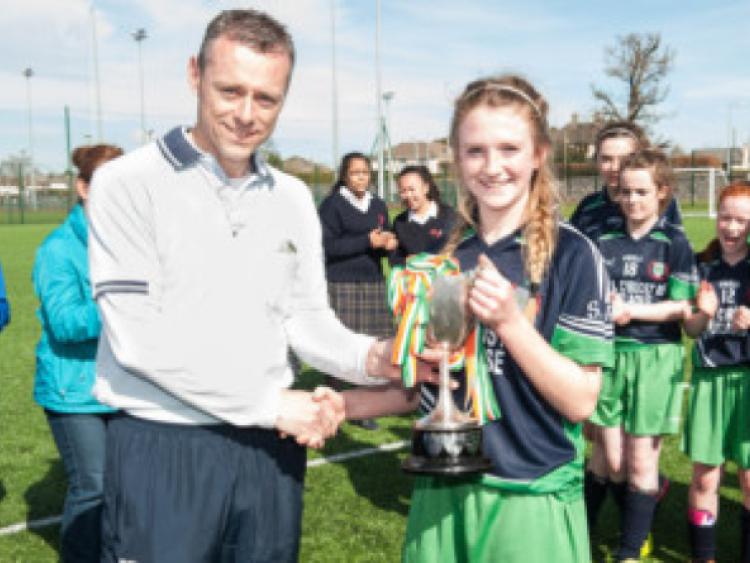 A devastating second half display helped Scoil Chríost Rí to claim a second Leinster soccer title on Tuesday last in Carlow IT, as they swept aside Loreto Kilkenny by six goals.

A devastating second half display helped Scoil Chríost Rí to claim a second Leinster soccer title on Tuesday last in Carlow IT, as they swept aside Loreto Kilkenny by six goals.

Loreto came back well over the course of the first half, but they eventually succumbed to Scoil Chríost Rí’s free-scoring attack after half time.

Fitzpatrick’s early strike set the tone for an entertaining opening half. Emma Lawlor almost doubled Chríost Rí’s advantage three minutes later when she almost got on the end of a through-ball.

A minute later, Loreto were level, as Jane Cass raced down the right wing and crossed in for Shauna Treacy to steer it home. Emma Lawlor tried to restore Chríost Rí’s advantage only to see her effort saved, but the Portlaoise school would soon retake the lead in spectacular fashion.

Gillian Keenan worked herself some space on the left edge of the penalty area before lofting the ball over Aine Trait for a superb goal.

Chríost Rí were growing in confidence the more the game went on, and Emma Lawlor was proving a real handful for the Loreto defence. She had another effort flash inches wide, before Leah Dowling scored Chríost Rí’s third. With the ball breaking to her 16 yards out, she reacted quickly to strike the ball on the half-volley, and her rising shot flew into the roof of the net.

That third goal came with five minutes left in the half, and the Portlaoise girls switched off a little, with Loreto taking advantage. Shauna Treacy scored their second, and that left the scores reading 3-2 in favour of Chríost Rí as the teams headed for their huddles.

Chríost Rí had started the first half in impressive fashion, but their start to the second was even better. Straight from the tip off, they worked the ball to Erone Fitzpatrick, and she raced through and slotted the ball into the bottom corner after just 15 seconds.

Four minutes later, their lead was out to three when centre-half Isabelle O’Toole fired home a rebound from a corner.

With the score now at 5-2, it was only a matter of how much Chríost Rí would win by, and they would go on to add three more. Sophie Delahunt got on the end of Gillian Keenan’s cross to sweep the ball to the net at the back post.

Chloe Langford got the seventh with a precise shot from the edge of the area, before Emma Lawlor got the goal her performance deserved, as she scored a rebound to become Chríost Rí’s seventh different goalscorer in a dominant win.