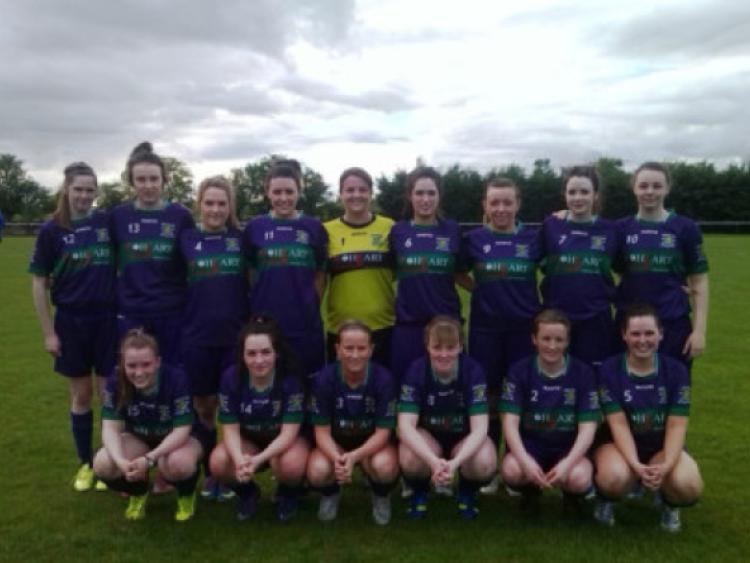 Portlaoise Ladies AFC continue their great form in the league with a comprehensive win over Rathangan making it seven wins from seven.

Portlaoise Ladies AFC continue their great form in the league with a comprehensive win over Rathangan making it seven wins from seven.

Portlaoise have been in incredible form in the first half of the league and their performance away to Rathangan AFC was to prove no different although the home side were a stronger outfit than the team they were when they first played Portlaoise back in April.

From the outset Rathangan were determined to hold their own as the sun shone down allowing for what was to be an enjoyable evening of soccer for both teams.

Portlaoise put the pressure on from the start but for the first 20 minutes were kept scoreless despite relentless attacks on the home sides goal. Portlaoise had some great chances including a free kick by midfielder Danielle Keane who blasted the ball towards the top right hand corner but it was met by a fine save from Rathangan keeper Linda Gorry.

Portlaoise continued to press despite some missed chances and their patient play was to soon pay off when their first goal arrived midway through the first half. A corner from Becka dipped and swerved and made its way into the far top left hand corner, narrowly missing the glove of Lind Gorry.

They added a second soon after from another corner kick when the lose ball fell to Jenny Conroy in the box and she volleyed it into the top of the net to make it 2-0.

The home side never gave up and pressed the Portlaoise backs, who held off the pressure with Ciara Dunphy, Maria Keane, Aisling Kehoe and Averil Westman holding a solid line.

The third goal came just before the half time whistle when the impressive Linda Gorry saved another attempt from Portlaoise side but Colleen Rickard followed in and slotted home from close range to put Portlaoise 3-0 up at half time.

The home side came out in the second half with fierce determination and were keen to get a score on the board. Aoife Carey came close to scoring when she slipped through the defense taking a shot from just outside the box but it went the wrong side of the post.

Portlaoise keeper Aoife Brennan was quick off the mark with her kick out to find Grainne Moran free on the wing who took off down the wing sending a superb pass into striker Tanya Delany. She beat the oncoming defender and goalie with a classy finish. Tanya Delany was soon to put another score on the board when some good play found the striker who put the ball away to finish the game with a 5-0 win for the visitors.

Portlaoise Ladies are now currently top of the league with 21 points and an unbeaten record but there is plenty of hard work ahead of them to keep them in contention for the league.