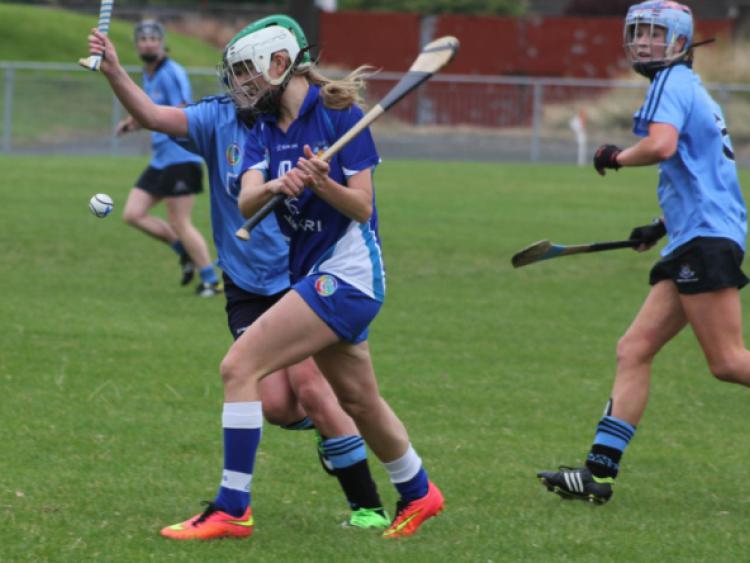 Laois camogie received its second boost of the day when the Junior team followed in the steps of the U-16’s in the curtain-raiser to beat Dublin by six points and claim their spot in the All-Ireland Final.

Laois camogie received its second boost of the day when the Junior team followed in the steps of the U-16’s in the curtain-raiser to beat Dublin by six points and claim their spot in the All-Ireland Final.

Laois were in the decider last year but lost out to Kildare. This time they will go head to head with Down who overcame Roscommon in the other semi-final at the weekend.

With the U-16 Camogie players having claimed the All-Ireland following a seven point victory over Kildare in the curtain-raiser in Geraldine Park, Athy, the Junior players continued a fine day for Laois Camogie with a well-rounded and superb display.

Laois claimed the ideal start to the game when, from the throw-in, Dawn Mortimer expertly played the ball to Sarah-Anne Fitzgerald who tore through the Dublin defence to rattle the net, before going on to split the posts from the resulting puck-out as Laois sailed into an early lead.

Claire Walsh got in on the scoring to extend the Laois lead to five points shortly after, but an Alison McGrath free directly after brought the Laois lead back to four points. Dublin kept in touch as Siobhan Keogh chipped away at the Laois lead, before Sarah-Anne Fitzgerald added a brace of points to send Laois into the clear once again.

Dublin rallied in the final ten minutes of the half and added points through Michelle Kelly and Roisin Collins to cut the deficit, before Collins sliced the Laois defence to fire a goal. Laois closed out the half on a high with Fitzgerald slotting a further two points to see Laois lead by three points at half-time on a scoreline of 1-7 to 1-4.

Dublin emerged for the second half determined to overturn the score, and did so right from the start. Just three minutes into the second half, the Dublin full-forward, Niamh Adams, fired past Laura Dunne in the Laois goals to lift the green flag and level the game. Three minutes later, Elaine Gallery followed suit to rattle the Laois net and set Dublin into the lead.

Laois replied in typical fashion with Niamh Dollard getting on the end of Fitzgerald’s ball into the square to pull a goal back for Laois and level the proceedings yet again. Now at the centre of Laois’ attack, Sarah-Anne Fitzgerald proved to be a thorn in the Dublin defence as she slotted four successive points to ease Laois back into the lead.

With eight minutes to go Niamh Dollard split the posts, before going on to provide the assist to Dawn Mortimer for Laois’ third goal as they ran out comfortable eight point victors as they now prepare for the All-Ireland Final.

With the experience of last year behind them, Laois will travel with confidence to Croke Park for the final on September 14. They already played Down in the group stages and after a dramatic game, came through by 3-12 to 1-17.

The sides were due to play off in a pointless play-off game after the group stages, but Laois chose not to travel to Down for the game. As it turned out, that was a good choice as they now advance to the final.