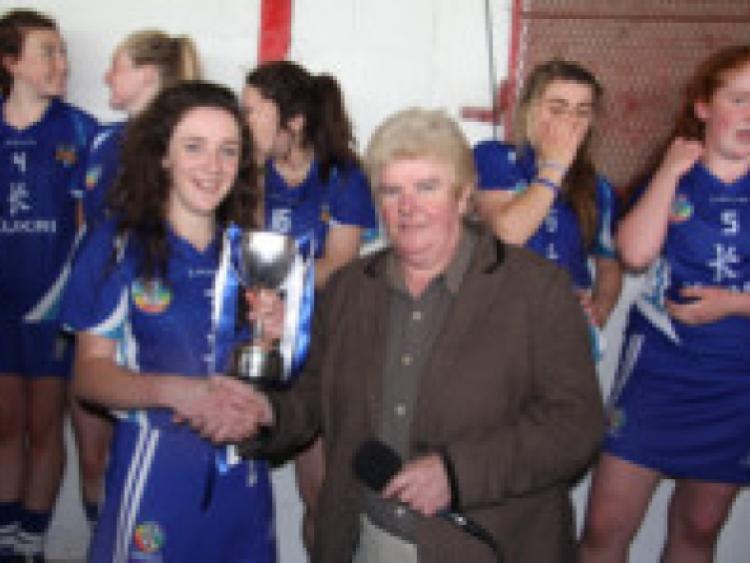 The Laois U-16 camogie team were crowned All Ireland Champions on Sunday afternoon as the with seven points to spare over their Kildare counterparts in Geraldine Park in Athy.

The Laois U-16 camogie team were crowned All Ireland Champions on Sunday afternoon as the with seven points to spare over their Kildare counterparts in Geraldine Park in Athy.

After winning their four group games with a score difference of plus 64, and having overcome Roscommon impressively in the semi-final, confidence was high in the Laois camp.

However they would have to be on their guard against a Kildare team who had also registered a good win over Roscommon in the group stages.

With an All-Ireland title on the line, nerves can become a significant factor for players of any age, let alone under sixteen. With that in mind, scores were hard to come by in the early stages.

As both teams tried to find their footing, Laois got off to a flyer when a high ball into the square was eventually kicked over the line by full-forward, Sara Cuddy, to lift the green flag and set the scoring underway.

As Kildare gradually settled into the game they began to heap pressure on the Laois defence, resulting in Lea Sutton’s first point for the Lilywhites. The Laois defenece continued to hold strong, but Sutton still crept in for her second point of the day to pull it back to a one point game.

Laois replied through a brace of long-range frees from centre-back, Lynda Keyes, to push their lead out to three points, before Lea Sutton continued to torment the Laois defence as she powered through to lift the green flag.

Laois, and Aishling O’Dea in particular, rallied before the break to see the St Brigid’s clubwoman fire two points in quick succession to see Laois hold a 1-4 to 1-2 lead at the half-time whistle.

Sutton was continuing to cause problems for the Laois ladies as she slotted her third of the day, but an Avril Deegan point restored Laois’ two point advantage shortly after. With a strong breeze blowing across the pitch, scores were proving hard to come by for both sides.

Ten minutes from time a high ball into the Kildare square was pounced on by Liadan Fennell, and the Laois half-forward made no mistake with the finish to claim Laois’ second goal of the afternoon.

Aishling O’Dea went on to cement the Laois victory with three points in the final minutes to help Laois claim the U-16 ‘C’ title in what is sure to be a huge boost to Camogie in the county.