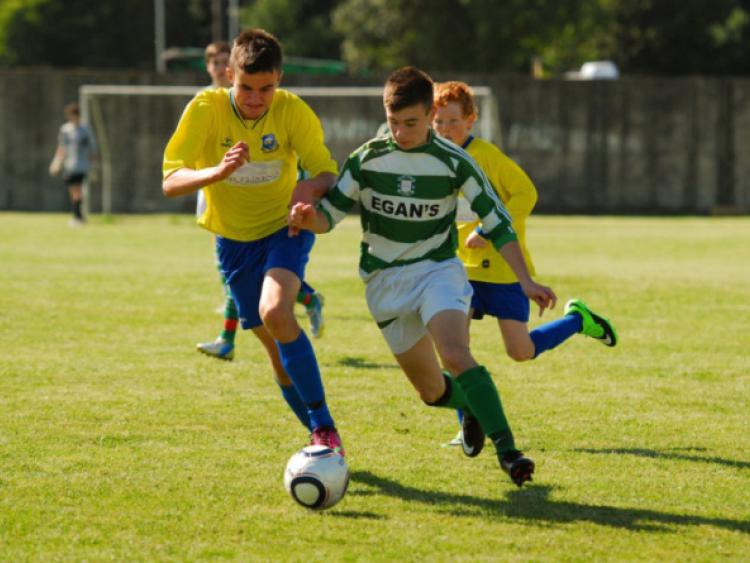 Portlaoise travelled to Portumna last Saturday to play the local team in the first league game of the season in the MSL U15s Major Division and came away with an impressive win.

Portlaoise travelled to Portumna last Saturday to play the local team in the first league game of the season in the MSL U15s Major Division and came away with an impressive win.

Portlaoise started on the front foot and took the lead on five minutes when Ross Brennan set up Jack Langton who finished to the net with a delicate lob over the keeper. Portumna replied on 15 minutes from a corner kick and the Portumna center forward scored with a brilliant overhead kick to make it 1-1.

Portlaoise regained the lead on 25 minutes when Jack Langton sent Ger Ryan through on goals and his brilliant cross left Ross Brennan with a tap in to make it 2-1.Portlaoise then went close when a Jack Langton header flashed just over the bar and five minutes later the Portumna keeper pulled off a point blank save from the same player.

On 35 minutes Portumna made it 2-2 when their central midfielder fired home from 20 yards and this is how it finished at the break.

Jack Langton hit the crossbar five minutes into the second half and from the rebound Brian Sheehy fired just wide. Portumna then dominated the next 20 minutes and only for Portlaoise keeper Sean McCormack, the home side would have taken the lead as he made two brilliant saves to deny the Portumna striker.

The Town then took the lead on 74 minutes when Brian Sheehy fired low into the bottom corner after being set up by Ruair Lewis to make it 3-2 .Ross Brennan was then fouled on the edge of the box on 77 minutes and he stepped up and curled a brilliant shot around the wall to make it 4-2 and this is how the game it finished.

Portlaoise Town were best served by Sean McCormack, Fionn Scully, Jason Maher, Ger Ryan, Jack Langton and Ross Brennan. Portumna pushed the Town all the way in this game and will be a match for any team in this league

Portlaoise Town’s next match in this League is away this Wednesday evening to Abbeyleix in a match that could go either way between the top two teams in Laois at U-15 level.