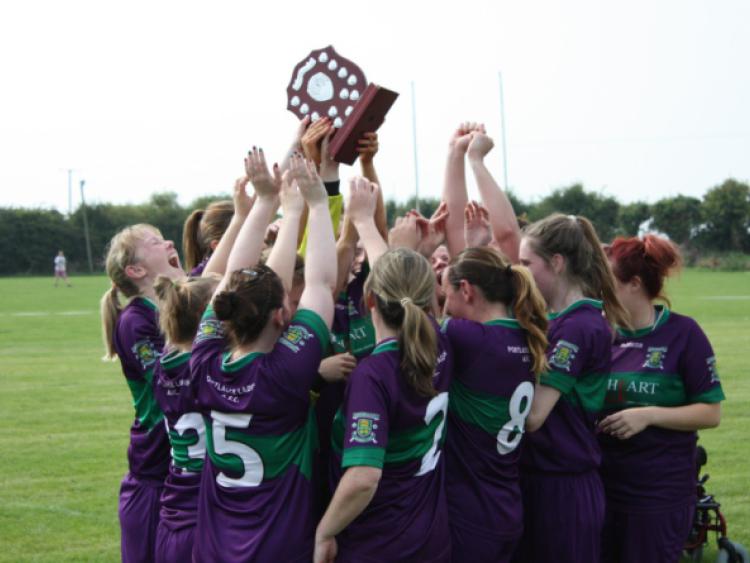 Portlaoise started out a bit nervous in the opening 10 minutes allowing for Castle Villa to mount several attacks on their back four which eventually led to a penalty being conceded. Castle Villa’s Sarah Kirwan stepped up to take the penalty which Portlaoise ‘keeper Natalia Cierpisz judged perfectly and saved to keep the score line level at 0-0.

Castle Villa went close again when Sarah Kirwan made her way into the box but Natalia Cierpisz managed to get her finger tips to the shot. The ball spun close to the goal line however she was quick to jump onto it, narrowly stopping it crossing the line.

Portlaoise then took control of the game when Mo Nerney ran down the left wing and struck the ball from the edge of the box scoring Portlaoise’s first goal. This goal settled Portlaoise into the game and they dominated for the remainder of the half. The second goal was soon to follow when Colleen Rickard made her way down the right wing sending a fine cross into striker Aoife Brennan who held her defender off and swiftly headed the ball with power into the back of the net making it 2-0.

With five minutes remaining in the first half, Becka Kelly found the back of the net when she slipped through the Castle Villa defence putting Portlaosie 3-0 up at half time.

On the resumption, Castle Villa came out with determination to claw back a score but Portlaoise held their own and played with heart to the very end. Midfielder Danielle Keane found Mo Nerney on the edge of the box who again found the back of the net with a powerful strike on goal making it 4-0.

The impressive Portlaoise back line of Ciara Dunphy, Aisling Kehoe, Bernie Bowe and Maria Keane held a solid line spreading the ball and clearing any attacks on their defence. A perfectly placed ball from Bernie Bowe found her striker Aoife Brennan who took the ball into the box and finished beautifully, making it 5-0.

The attacks were now relentless with the Castle Villa’s heads starting to drop, Portlaoise continued to take advantage of this with some lovely passing around the field. The sixth goal was soon to follow when Jenny Conroy sent a neat pass through to Eleanor Merriman in the box who then found Becka Kelly who finished from close range to make it 6-0.

Castle Villa let their frustrations get the best of them when Maria Keane was fouled and brought down. Bernie Bowe took the free from the halfway line and found Colleen Rickard who lobbed the keeper finishing in emphatic style. This made it 7-0 with 10 minutes remaining.

In credit to Castle Villa they never gave up with some great approach work from their wing back Nolleen Kenny. This left Castle Villa very thin at the back and Jenny Conroy took full advantage of this when she picked the ball up on the half way line, dribbled past two Castle Villa defenders into the box and finished with a beautiful strike in the top right hand corner of the net. This made a score line of 8-0 at full time.

This has been an incredible year for Portlaoise Ladies AFC. It is their first year together and to claim the double has been an unbelievable achievement for both the girls and the club. To go the whole season unbeaten and to gain promotion to Division 1 is a credit to the commitment of the girls and everyone involved.

Portlaoise Ladies would like to extend a special thanks main sponsor HEART ER Ambulance Service who have been incredible all season, all their supporters, their club, their medic Jack Conroy and their Manager/ Coach Bernie Bowe for her outstanding commitment to her team all season and guiding the team to league and shield glory.