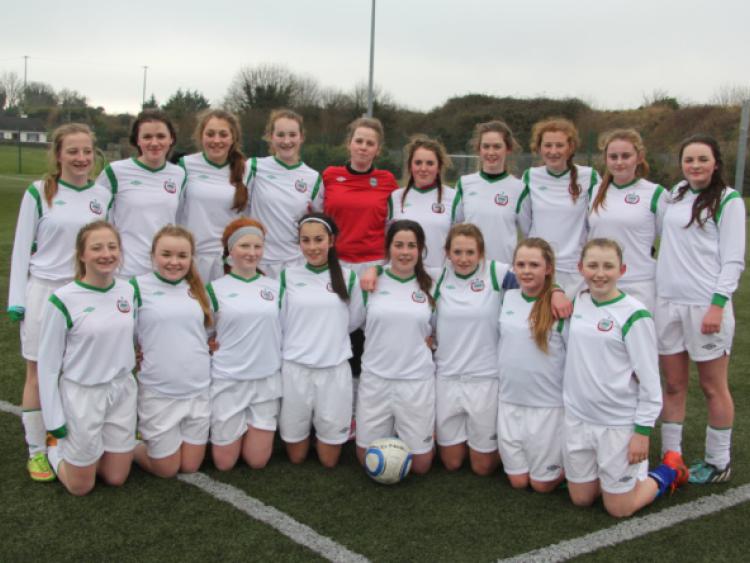 After a heart-breaking defeat in the Under-17 Leinster decider a week before, Scoil Chríost Rí Portlaoise got back to winning ways in style in the Under-15 category with a dominant display at the Leisure Centre on Tuesday afternoon.

After a heart-breaking defeat in the Under-17 Leinster decider a week before, Scoil Chríost Rí Portlaoise got back to winning ways in style in the Under-15 category with a dominant display at the Leisure Centre on Tuesday afternoon.

Having reached the All-Ireland Final in this grade last year, hopes were similarly high this time around and they didn’t disappoint here. Sacred Heart Tullamore are a side with a very strong reputation in soccer and were expected to pose the Portlaoise girls a few problems, but a blistering early start saw a super finish from Zoe Keegan settle any lingering doubts about the quality this team possesses.

Further goals before the break from Gillian Keenan and a super looping half-volley from Chloe Langford meant that Chríost Rí went in with a three goal cushion, and after a much-needed break from the bitter breeze they weren’t long about finding the back of the net again after the restart.

Gillian Keenan added another after some superb wing wizardry from the relentless Erone Fitzpatrick before Zoe Keegan bagged her second with some typically gutsy work and goal-machine Emma Lawlor got in on the act to make it 6-0 with ten minutes to go.

Both sides made a raft of changes in the second-half and it was one of the Portlaoise replacements that rounded off the scoring when Kiahara Dempsey slotted home a beautiful finish after a through ball from Chloe Langford.

It was a superb all-round display. Full-backs Eabha Dunne and Aoife Daly worked well to support the rock-sold centre-back partnership of Maeve Phelan and Isabella O’Toole. The other half of the Daly twins, Elaine showed her value on her return to the code with a tireless defensive midfield performance which allowed the goal-scoring attackers to do what they do best. On this evidence, Scoil Chríost Rí have every chance of going equally far in the competition this time around.