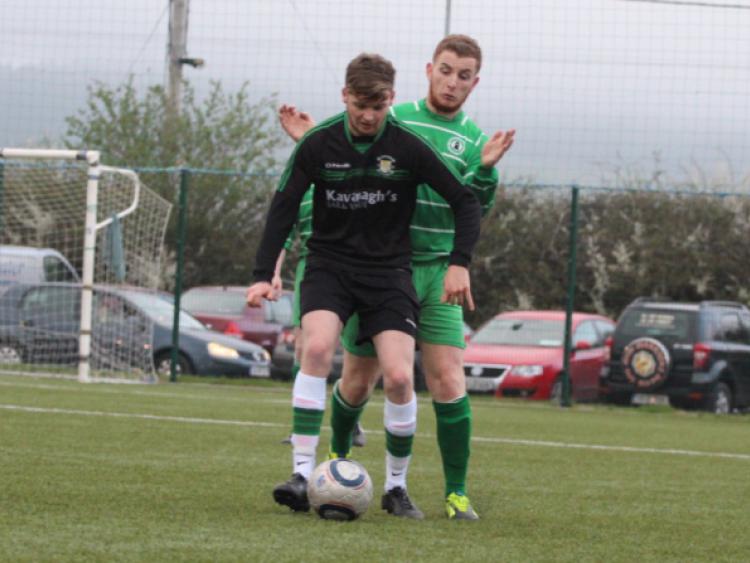 A Ger Dunne save and the decisive fifth penalty from in form Martin Staunton proved to be enough to see the young side through.

The home side had the better of the opening exchanges and came out of the blocks at a high tempo looking to unsettle the league leaders and outright favourites for the competition.

Ger Dunne in the Portlaoise goal was called into action as soon as the fifth minute after a break down the left for Enniskerry saw them in on goal only for Dunne to pull off a save low to his left. Enniskerry’s early pressure saw them inside the Portlaoise box again and this time they were awarded a penalty after a pass deflected off Jonathan Savages arm. Kyle Kelly placed the ball in the bottom left corner and put his side into a tenth minute 1-0 lead.

Enniskerry’s Sean Tahar could have doubled his sides lead two minutes later only for Dunne pulling off an excellent reaction save from a header.

The Portlaoise equaliser came in the 17th minute after the busy Jason Murphy was fouled outside the box. Colm Poole delivered an inviting cross into the danger area which was met by the head of Martin Staunton and deflected into the net. The goal settled Portlaoise and they took control of the game for the rest of the half as Enniskerry started to retreat back and look to play on the counter. Jason Murphy saw his shot from distance wide of the post in the 39th minute in the only other real chance of the half.

The second half started as the first finished, as Portlaoise looked to penetrate the Enniskerry defensive wall but to no avail. Dylan McCabe shot just over at the front post from a Shane Collins corner in the 57th minute after a great run across the front to free himself.

Paul Cahillane was introduced in the 64th minute as McCabe moved to the right wing and both started to influence the game immediately. Portlaise had the better of the closing stages as Enniskerry sat in and tried to break but James Mullaney and Jonathan Savage were marshalling the defence brilliantly.

Extra time saw the introduction of Eoghan White on his return from injury and he started to enforce the midfield with some brilliant defensive tackles and cover play for the ever willing dribbler Mullaney. Neil Heffernan was tireless in midfield and started to become more influential as extra time wore on. Cahillane was set up by Murphy and his run and strike was good but just off target as the ball flew across the face of the goal.

The game finished out at 1-1 and penalties loomed to decide who would go forward to the final. Enniskerry drew first blood but it was matched by a superb Cahillane penalty. Ger Dunne then saved low to his right from Evan Brack to give Portlaoise the advantage as McCabe, Heffernan and Murphy all finished excellently before Martin Staunton tucked away the all important fifth to see Portlaoise through.

Portlaoise will face Larkview Boys in the Final on Friday, May 1 in the UCD Bowl, and the club would ask supporters to come along and cheer on this young side.

Portlaoise are back in league action this Saturday at 7pm where they travel to face Liffey Wanderers, who have a 100% league record so far this season with 13 wins and who on Sunday reached the FAI Junior Cup Final after a superb 2-1 in Wexford.