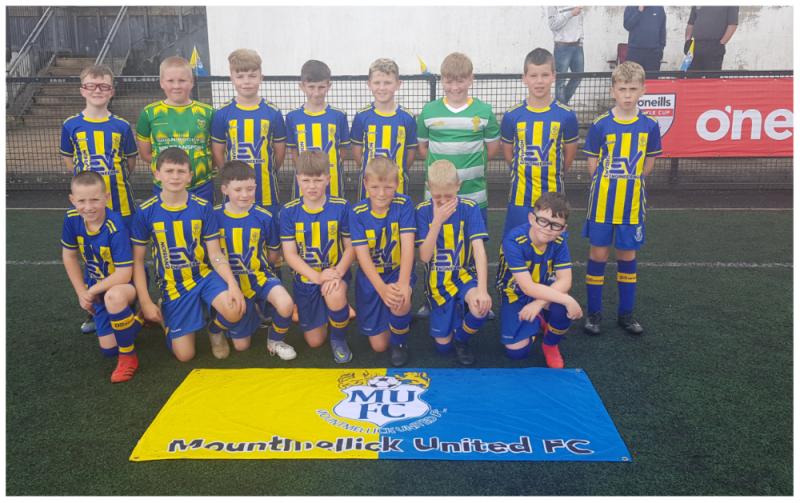 Mountmellick United u11s are taking part in the Foyle cup international tournament in Derry, the tournament has been running since 1992 and started with just eight teams and has now grown to one of the biggest soccer tournaments around with over 450 teams from around the world competing across a range of ages groups, Mountmellick United u11s are the first team in the clubs history to compete in an international tournament,  they were drawn in group A, alongside teams of the calibre of Hamilton Academical from Scotland,  Hillsborough boys from England and Glentoran from northern Ireland along with Don Bosco Colts,  Kildrum Tigers, and St Patricks,

Head Coach Ray Wilkins said, it's an amazing opportunity for these lads and they have grasped it with both hands, the team would not have been able to do this with the backing of both parents and the club, the memories and experience the boys will take from this will last a lifetime,  "

The U11s played six group games, with three wins and 3 losses,  the most impressive win is the 2-1 win over Professional academy team Hamilton Academical from Scotland, the lads finished the group on 9 points from 6 games. This qualified them for the last 16 of the Rosebowl. Mountmellick put i a great performance and defeated Eglington Eagles 2-0. They then defeated the Hillsborough Colts in the quarter final. Tomorrow at 10 am they will play the semi-final against Tummery Ath FC  with the winners to play either Portstewart FC or Colraine Olympic in the Rose bowl Final at 1.

The lad's behavior on and off the pitch has been impeccable and they are a credit to parents and the club, they have proved themselves as well capable of competing. Best of luck to the lads in closing stages of the tournament tomorrow.