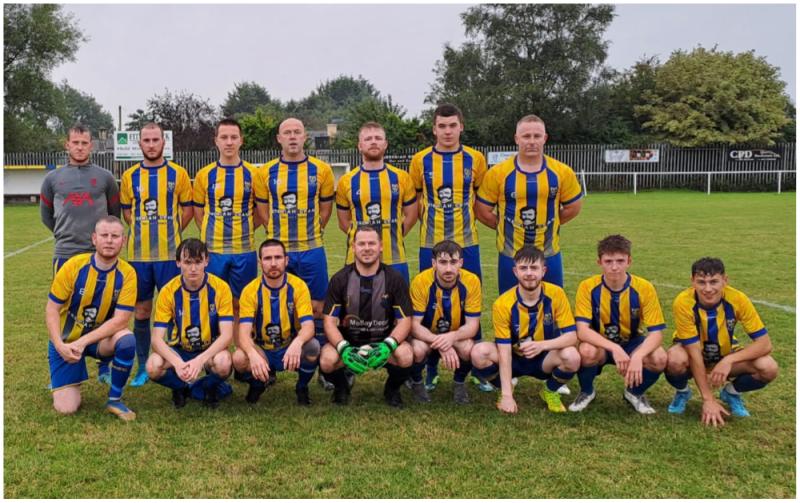 The Senior Division of the Combined Counties Football League got underway this Sunday in torrential conditions at Conor Davis Park. Mountmellick twice let a two-goal lead slip as Ballinahown fought back valiantly to rescue a three-all draw – but it could have been so much more.

Ballinahown started the game the stronger of the two sides, with all their pressure coming down Mountmellick’s right channel. Mountmellick right-back, Jordan Collins, and right-winger, Matthew Kearney was full of energy throughout and managed the Ballinahown offence with relative ease.

After a strong opening twenty minutes, Ballinahown started to lose their way, allowing the hosts into the game. Mountmellick’s 4-4-2 formation relies heavily on the midfield duo having a big impact on the game; Owen Thoman and Eoghan O’Riordan were off the pace early on but started to dictate the play as the half went on, turning the tie in Mountmellick’s favour.

Mountmellick broke the deadlock in the 32nd minute when Ballinahown goalkeeper, Barry Rohan spilled a Robbie Hibbitts corner, allowing Eoghan O’Riordan to turn the ball home. Mountmellick doubled their lead in the 44th minute when Ballinahown failed to deal with a Mark Grennan throw into the box. The ball fell to Matthew Kearney who made no mistake, smashing the ball into the roof of the net.

Ballinahown got back into the tie in the 55th minute when Brian Gill got a free header in the box off a David Harrington free kick. But the fight-back looked dead and buried just two minutes later, when Owen Thomas played a wonderful through ball from deep inside his own half, to find Mark Grennan who calmly rounded Barry Rohan and slotted the ball into an empty net.

The two-goal cushion did not last long, however, as Mountmellick center-back, Jack Lith completely fluffed his lines, failing to clear a straight-forward ball into the box, allowing Jason Nugent to capitalise.

Things went from bad to worse for Mountmellick moments later when Owen Thomas – man of the match until that point – was forced off with a nasty-looking bicep injury. Thomas was replaced by Liam Cunningham, who slotted in at left-back, moving Ryan Conran into midfield. The experiment lasted less than ten minutes before Conran was himself replaced by Darragh Coss. Coss went up front with Luke O’Connor dropping back into the middle.

In the 77th minute, Mark Grennan had a chance to grab his second goal, but Barry Rohan made a great save to deny the experienced striker. Instead, Ballinahown went on the attack; the Mountmellick defence was once again at sixes and sevens, failing to deal with a corner as Ian Rosney equalised for the visitors.

The goal gave the Westmeath men the impetus to push on for a winner in the final five minutes and they so nearly did. Robbie Hibbitts was booked in the 90th minute in a last-gasp attempt to halt a Ballinahown attack. David Harrington took a quick free kick, finding the top corner of Martin Forde’s goal. But before the visitors had time to celebrate, referee, Leslie Buckley called them back and ordered the free be re-taken. Luckily for Mountmellick, Harrington couldn’t repeat the trick and the game ended in a stalemate.

Despite the football intelligence and strong leadership of Shane O’Connell, Mountmellick was naïve, passive, and quite frankly abysmal in defence at times. They will need to tighten up at the back or they risk the season getting away from them, even at this very early stage.