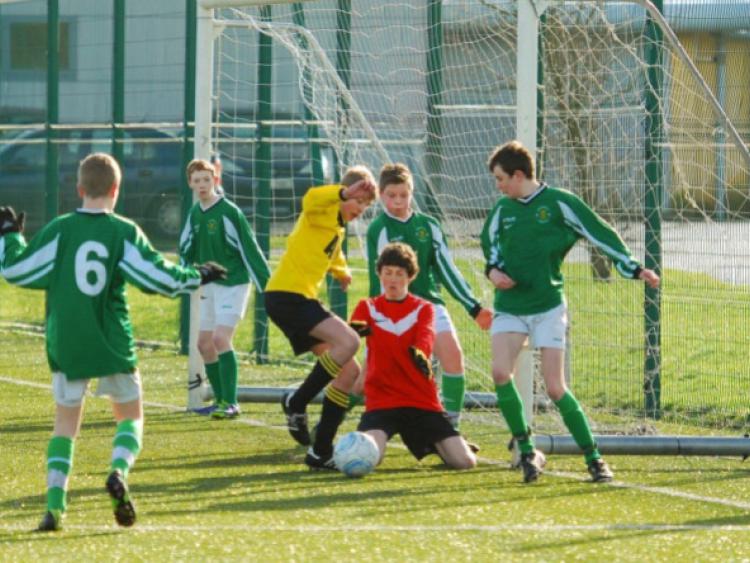 Portlaoise played Ashbourne in the Leisure Centre last Saturday afternoon in the last 32 of the SFAI National Cup and lost out to a late goal from the highly touted visitors.

Portlaoise played Ashbourne in the Leisure Centre last Saturday afternoon in the last 32 of the SFAI National Cup and lost out to a late goal from the highly touted visitors.

The draw for the last 32 was drawn again after the FAI upheld a objection by the DDSL and Portlaoise were then draw against Ashbourne after originally getting a bye into the last 16. Played before a large crowd, this game was played to the highest standards and Ashbourne, one of the favourites to win the cup, were given a fright by a gallant Portlaoise team. Ashbourne started in impressive form and in the first 15 minutes had three great chance to take the lead but Sean McCormack pulled off three magnificent saves to deny them. On 25 minutes he denied their striker again when he pulled off another magnificent stop.

Portlaoise then gained parity in midfield and had two half-chances but Aaron Wright and Ronan McEvoy were wide on both occasions.The Portlaoise defence got the upperhand and Niall Doran, Jason Maher, Brian Sheehy and Charlie O’Brien defended magnificenty in the last 15 minutes and it finished 0-0 at the break.

Portlaoise started the second half in good style and dominated in midfield where Ross Brennan, Ruairi Lewis, Craig Reddin, Aaron Wright and Ronan McEvoy work tirelessly and closed downed the much vaunted Ashbourne midfield. Up front Jack Langton worked hard as the only front man.

Sean McCormack made another great save from a Ashbourne free-kick after Fionn Scully has handled the ball just outside the box on 55 minutes. Ronan McEvoy then set up Jack Langton but the ‘keeper saved well on 60 minutes and on 65 minutes Ruairi Lewis went close with a brilliant free-kick which was just over.

After all their efforts, Portlaoise suffered heartbreak near the end when Ashbourne scored the winner on the 80th minute when their striker broke clear on the right and shot home with a powerful effort.

This was a great display against a star studded Ashbourne team who has two Irish International and also two players who were in England last week on trials with English Premiership clubs.

All the squad played their part in this match and it would be unfair two single out any player but Sean McCormack the Portlaoise ‘keeper and Ireland U-15 Regional squad member was magnificent and kept the Town in this match.This is not the end of the season for Portlaoise as the meet Mid- Sutton from Dublin in the first round of the Lions National Cup. They also play Mountmellick in the MSL Cup and they play Edenderry or Nenagh in the semi-final of the Mid-Leinster Cup.

They are joint leaders of the MSL U15s Major Division with Tullamore Town and still have nine league games to play. Their next match is Saturday when the play Birr Town in the MSL Major Division in Rossleighan Park at 12.30 pm.

Portlaoise Town A U-16s managed by Mick Rogers and Paddy Murphy are in to last 16 after a great victory over Clonmel Town in the Leisure Center Portlaoise last Saturday afternoon. They won on penalties after it finished 5-5 after extra time and now meet Herberstown or Tramore at home with date and kick-off time to be confirmed.